Part 2 - My initial experience and impressions of the Exige 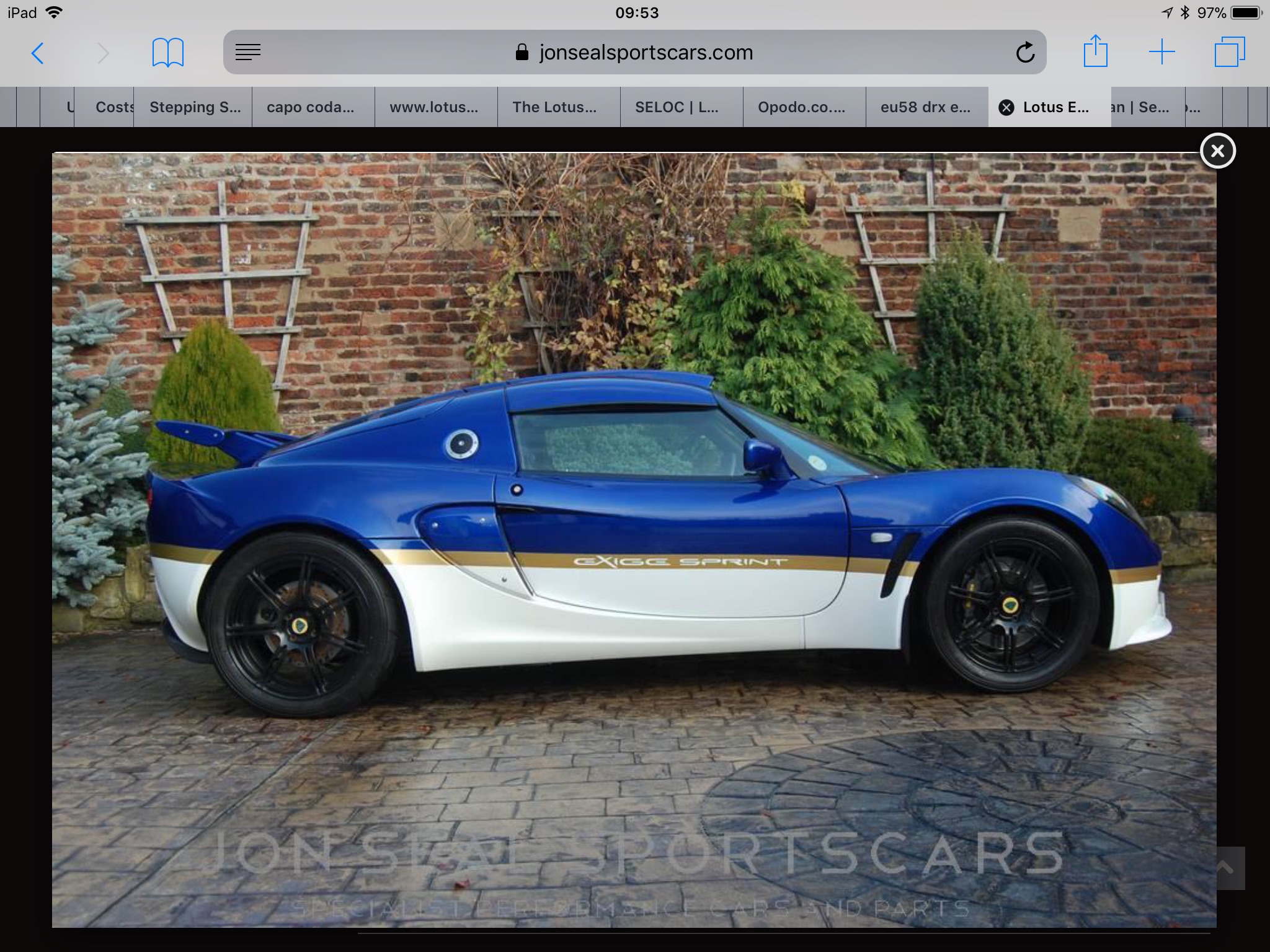 Picking up your Lotus, or any dream car for that matter, is just like being a kid at Christmas. If it isn't then you’ve either had a charisma bypass or you shouldn't be buying that Lotus. I had a couple of weeks to wait in between paying the deposit and collecting the car. Not a day went by without thinking about the car or having a look at the sale pictures.

The other joy of these special cars and this community is that many have a known history. During that gap I reached out to several previous owners to check the providence and condition and it all checked out well.

As if I needed any more reasons to be excited, those conversations only added more fuel. It turned out it had a 2bular exhaust, baffled sump added, had been well cared for regardless of cost, the 260 ecu upgrade had the right accompanying additions of twin oil coolers, TRD airbox etc, but was spared the Cup extremities. I’d ruled out getting a true cup car as it was too extreme for my needs. So for me this car ticked every single box.

The day came and it was one of mixed emotions as I climbed into the VX for the last time, bottled up excitment combined with parting from a car I never thought I'd sell. Having owned, cared and kept 10 years longer that I had any other car. It had amazing memories and I loved it, but all those incredible modifications hardening the car was now inversly proportional to the softening of me and ultimately the reason why I was moving on. How ironic to be saying I was getting an Exige because I wanted something softer! But that was the truth.

The long drive from the London area to Jon Seal, south of Leeds was a chance to bask in what was a fantastic car. I took it gently with the occasional engine leg stretch along the dull motorway. At a fuel stop at the service station, walking back to the car I had to take a picture of it gleaming on the forecourt. Goodbye old friend.

The drive was uneventful until I arrived at Jon’s for the main event. There it was, resplendent. It was in great condition, beautifully prepared looking like a new car both inside and out. 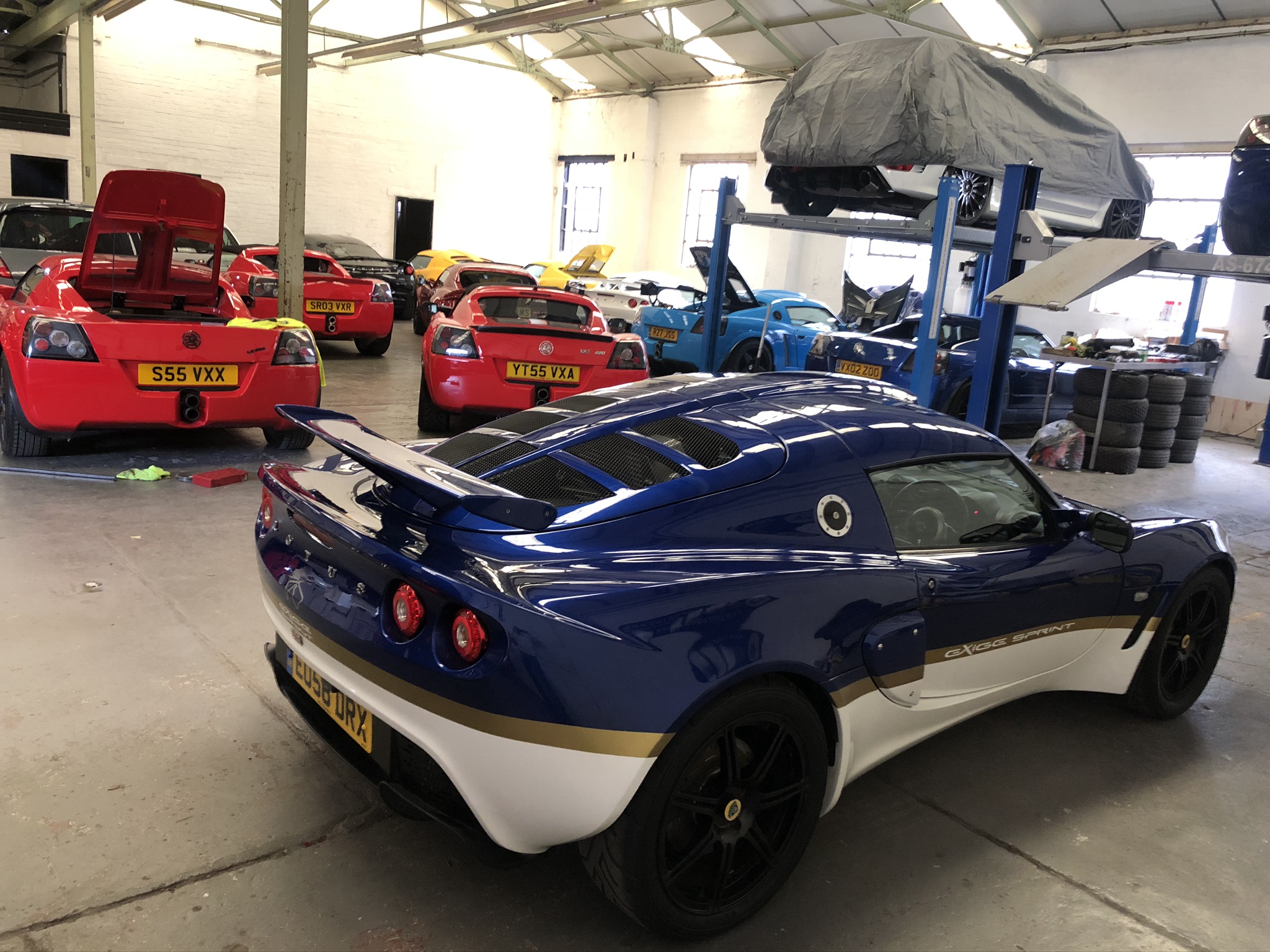 I find the look of all Exiges in the flesh is something to behold, it’s the shape of the rear half of the S2 that gets me every time, the roof scoop (both short and full) and the way that blends down the back of the car in a wonderful curve to be met by the wing. That wing, how I love the look of the wing. On some cars a wing looks like it's tacked on, on this it looks like it’s a natural part. I find them absolutely beautiful as a design with the right level of stirking presence and GT3 racer stance.

I'd never driven any Exige, never even sat in an S2 or experienced it's handling. I’d committed to the car based on photos, no test drive and trust. I had no worries. I knew the car was good, Jon Seal came highly recommended and I intimately knew what it felt like to drive a Lotus type car with an alluminium chassis stuck together with glue. I wasn’t expecting a wildly different driving experience from the steed I was leaving.

We chatted from some time about the cars, did the paperwork and the car was mine. There was no test drive, there was no need. My first drive would be my drive home. I dropped into the seat and the first thing that struck me was the seating position seemed a fraction lower in relation to looking out the windscreen. That could be an illusion due to the shape of the panels compared to the VX and the hardtop giving a more enclosed feeling. It felt good.

I hit the start button to let the car burst into life, reversed out and began my drive home grinning like a Cheshire cat. It’s moments like these you don’t forget. The car immediately felt natural but a bit different. More luxuirous than the VX, helped by the updated cabin with touring pack. I did immediately notice the difference returning to the standard rack on the Exige as my VX had the short ratio rack which gives an even more immediate and pointy feel. Apart from that the steering was just the same pin sharp, tactile wonder jostling around in your relaxed grip telling you every contour of the tarmac.

With the car fully warmed up it was time to test it out. As the revs wind up, 4,500 there is a lift in tone, 5,600ish a second lift and then at 6,600ish a further final lift with the pitch getting higher. All the while the holler of the supercharger turning into a banzai scream. It’s a cacophony of sound with a building crachendo as the change-up lights flash at 8,500rpm. Mental. Every fibre and sinew is telling you to change gears 3,000rpm ago and you have to resist the urge. It takes a few attempts to get used to that. Previous ownership of an S2000 meant my learning curve was quicker.

The whole thing happens a flurry with the combination of noise, the supercharger whine, the revs racing, the car really coming alive and propelling you forwards like the movie especially effects of a spaceship shifting to light speed. Everything is a bit of a blur.

Between 6 and 8,5 the car has got you hooked into it, just where it wants you. Utterly absorbed. The speed seems to build exponentially in the higher rev band, urging you on into the manic zone. At that point the car feels really quick.

This is the exact opposite of the way the VX was. It was mental to start with as it punched its way forwards initially and then settled on the wave of torque. The Lotus on the other hand is all calm and then starts to build like David Banner gradually turning into Hulk and once the shirt rips, then that’s it, stuff starts to fly and it gets a bit scary and you continue to hurtle forwards.

It’s a multi dimensional assault on your senses.

The aerodynamics and downforce is definitely noticeable, the car is more stable at higher speed bends and feels more planted. Early on in the journey, the left-right-left of going straight ahead on a mini roundabout, at 25 mph was revealing as well. It just seemed to mould and morph around it, as if it was water flowing around a rock. It startled me to the point of spontaneously letting out a joyous laugh in just how fluid it was.

It was a memorable drive home and to be greeted by my wife and son (who was literally bursting with excitement) as I pulled in, is a moment I will treasure and never forget. I was now the proud owner of a stunning Exige. (Part 3 to follow, One Year In) 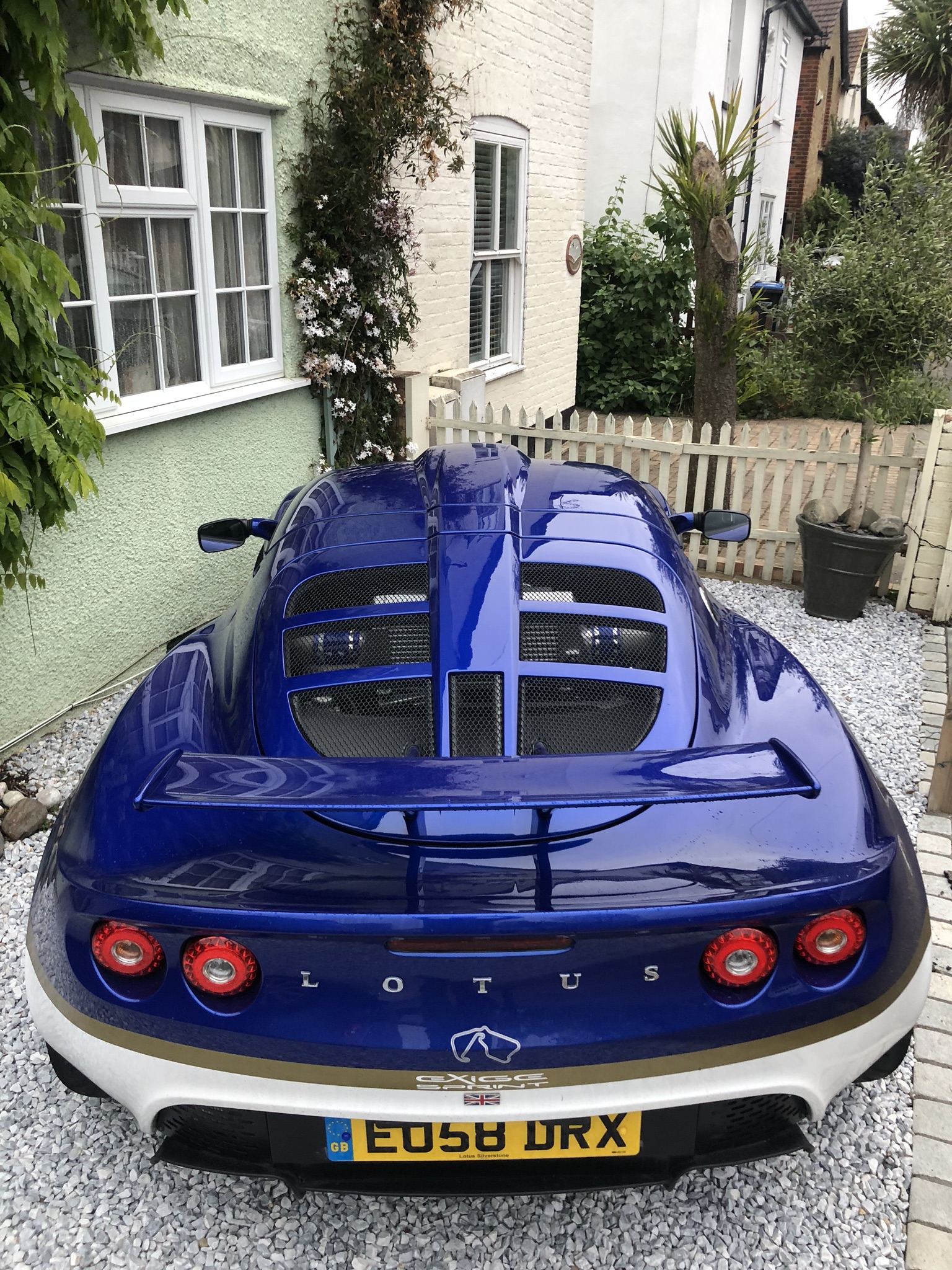 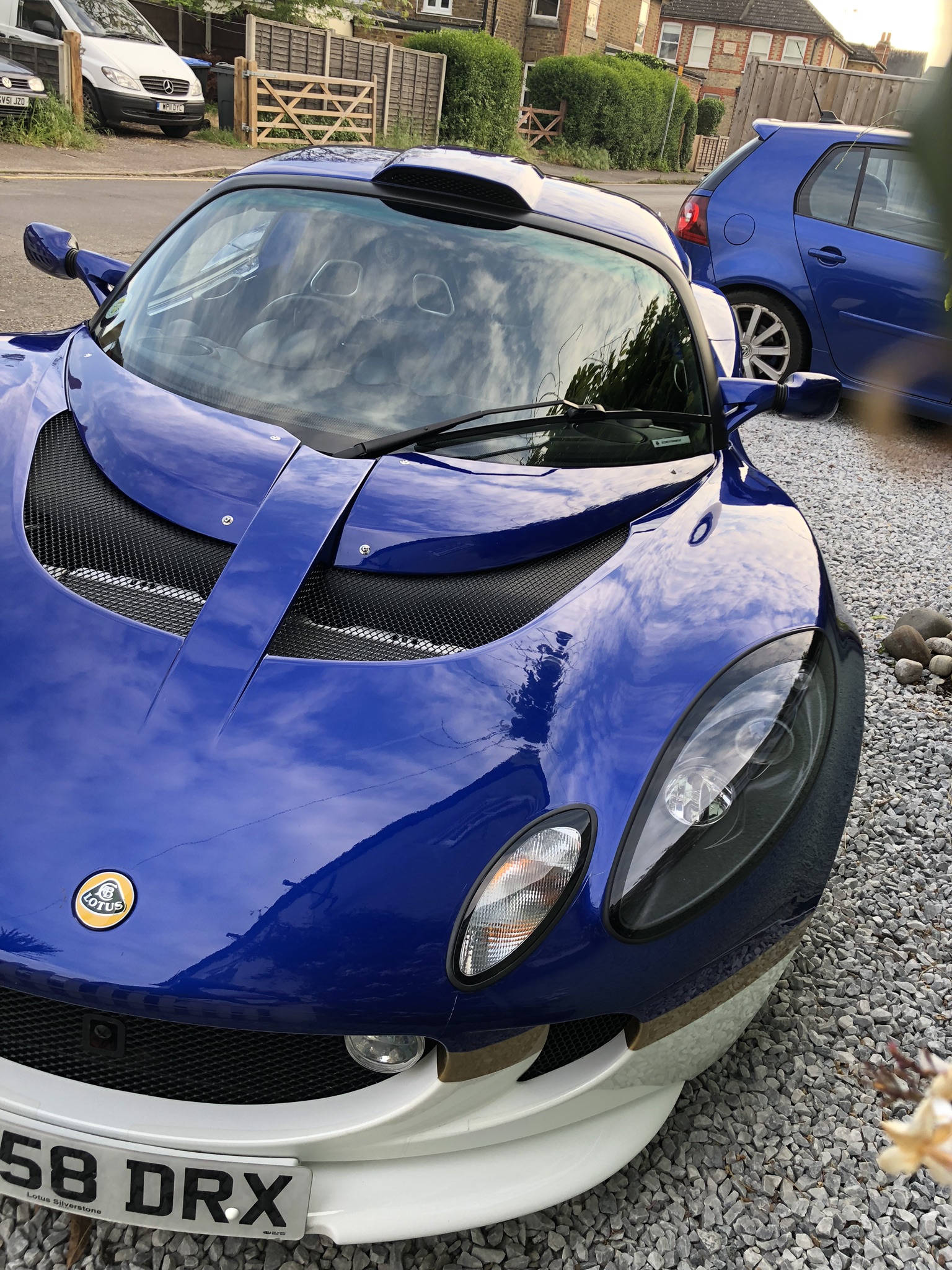 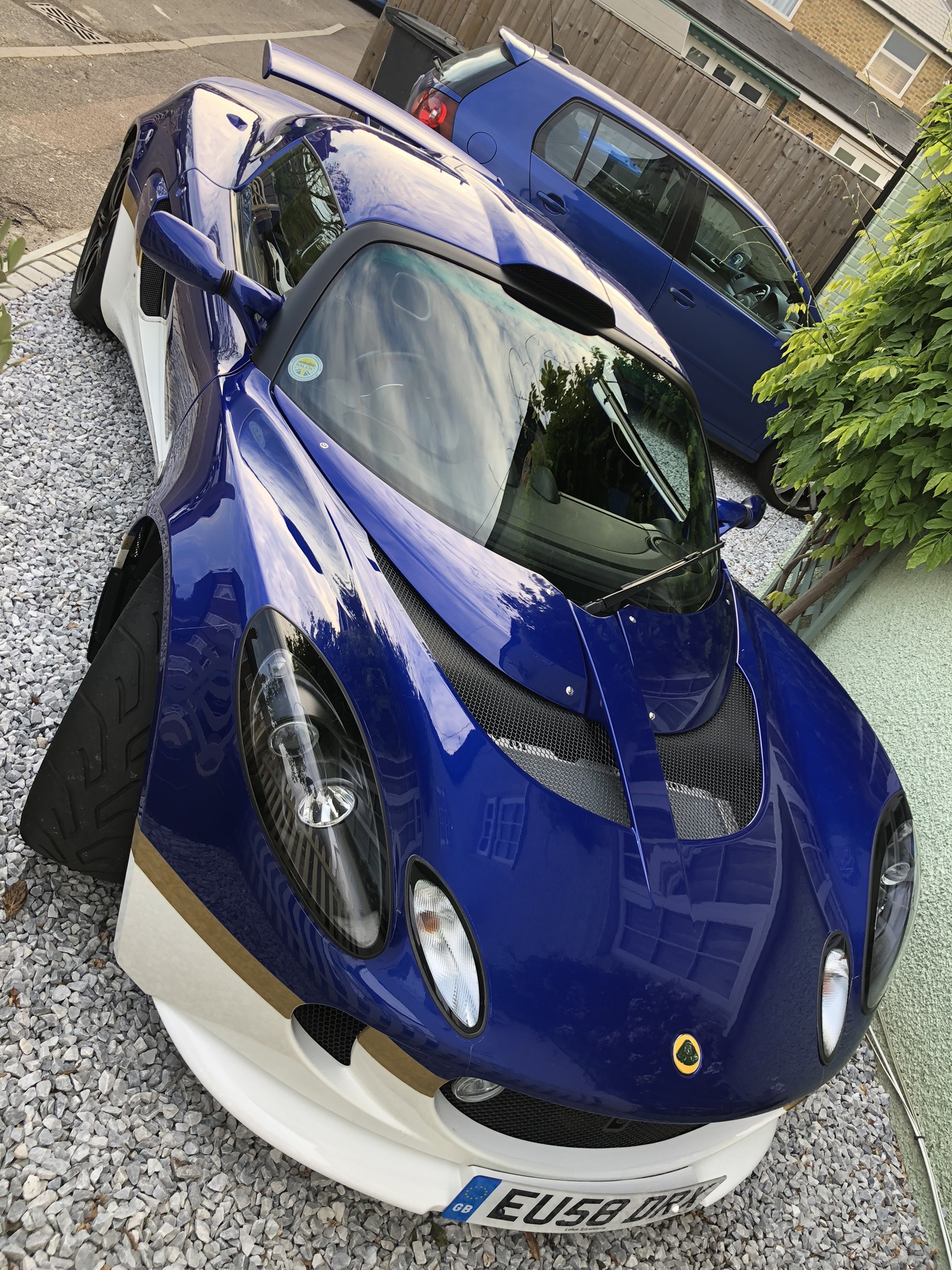 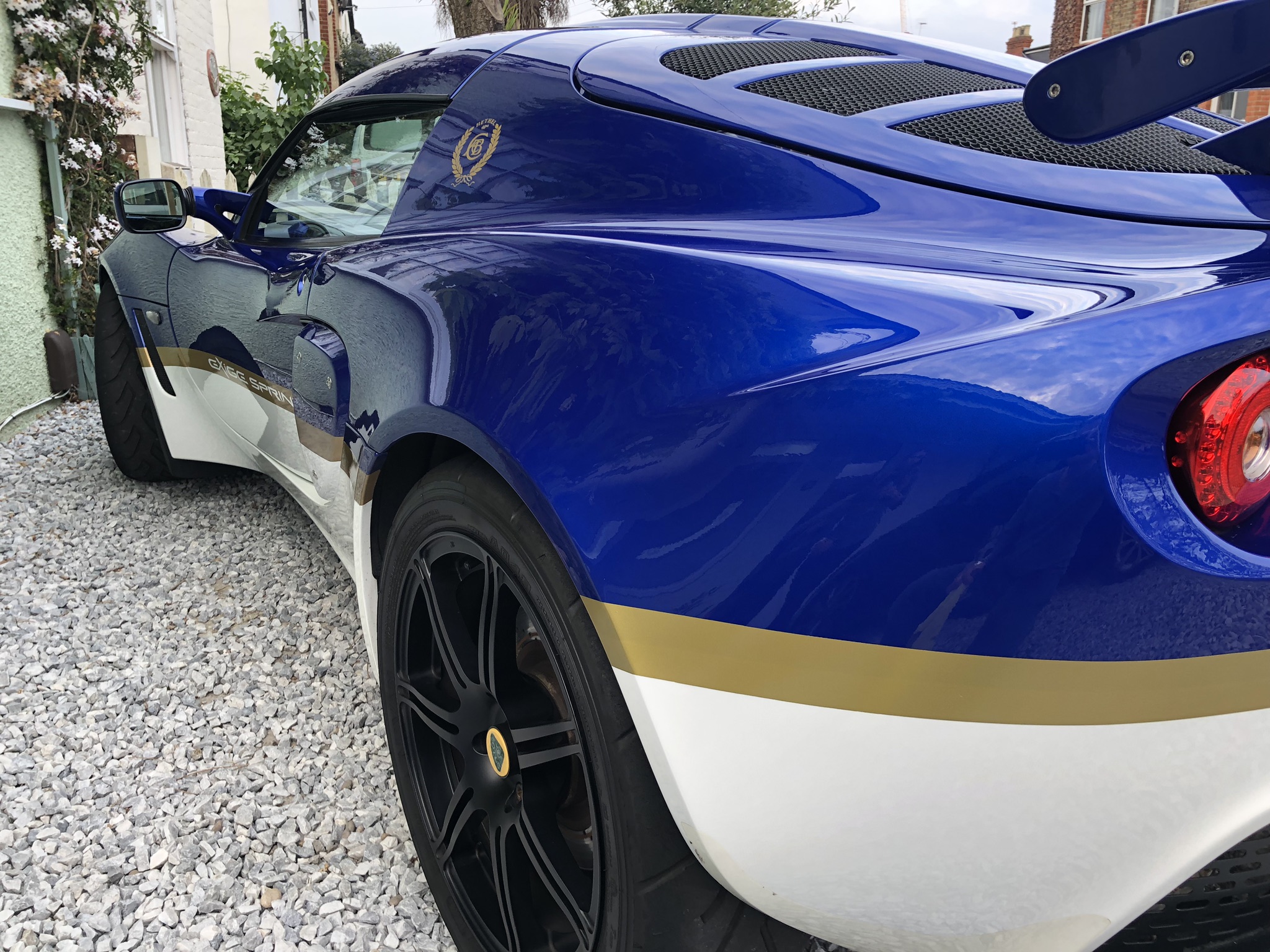 Great writeup, not much to add other than... I agree

Fantastic write up and some great pictures. Thanks for taking the time to post , again!
Top

When I buy a new car I just want to get home without any incidents!

I remember 5yrs ago picking up my Exige, the first 5 miles on route back home and I was hooked. So much so I detoured on the way home adding another 50miles

Still get the same feeling 5yrs on.

Great first drive write up... the Exige defo gets under your skin... I've had mine since 2005 and I still love it
Top

Only going and collecting my S1 Elise S2 Exige and S1 Sport 190 has been like this, every other car has just been a car and I've owned some great cars, a Lotus just gets you every time.....
Top

Fantastic looking car you have there - I hadn't seen many photographs of blue/white Sprints, ad yours do this combination full justice.
2010 Exige S RGB #138
Top
Post Reply
9 posts • Page 1 of 1