This is where we proud owners can upload information and pictures of our pride-and-joys (their Exige that is..)
Post Reply

Just remember to blow and not suck!

The pump is proper tonking now, starting to get a bit giddy now about getting this car on the road again.

- Brake Fluid. I could do it any time, but a good friend has a pressure bleeder and we always use my antics as an excuse to catch up and have a cuppa whilst bleeding some brakes. He's on holiday and back in a week.

- AC man is preventing the front clam from going back on. Hoping to get an update from him next week.

I might even be tempted to reverse the car out of the garage this weekend and wash the back half of it. It's looking a bit miserable all covered in dust and (still) bits of veg peeling from Christmas and my garage prep sesh

Some good progress this weekend.

Got my replacement door switch fitted, 5 second job which once done allowed me to put the interior back in and together. No pics but you've seen the interior plenty of times before. 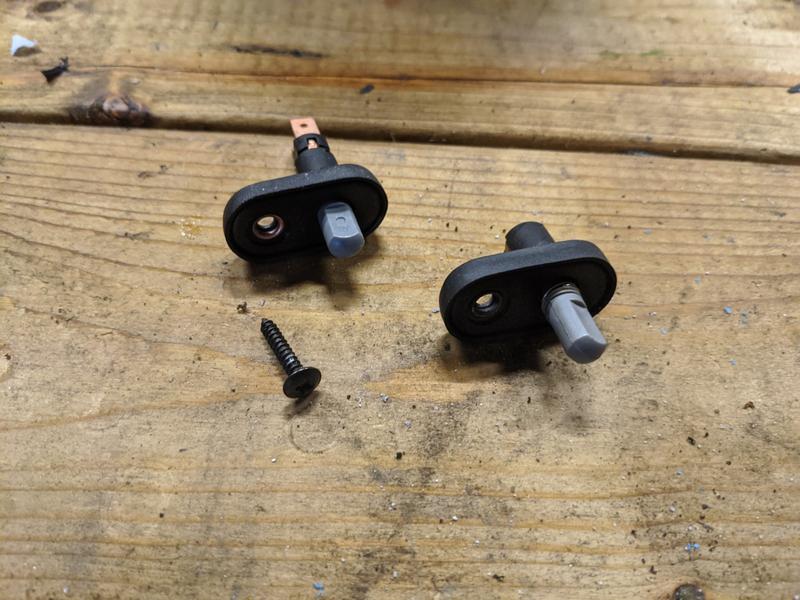 I then got a replacement plug for the charge cooler pump, so got to work rewiring that. I'm no spark, but I'm much happier with it now. 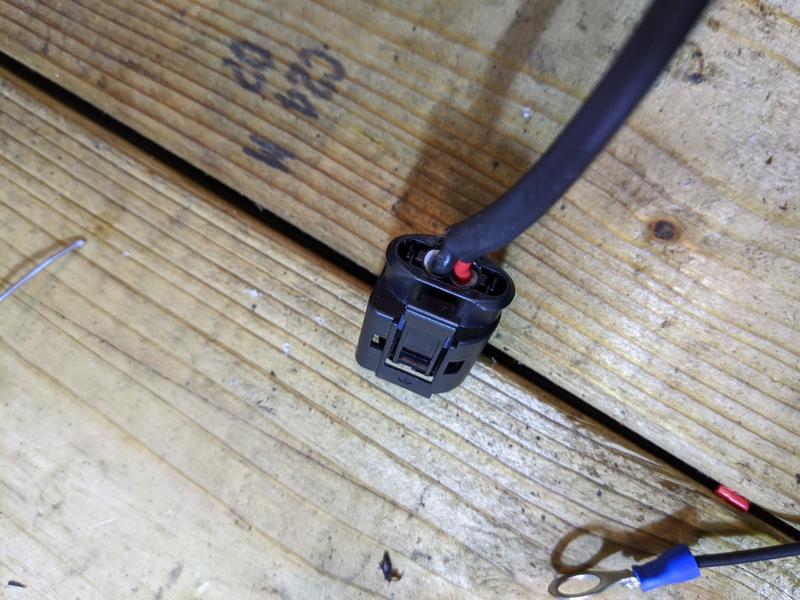 I still had problems getting a good amount of flow through the coolant circuit as referenced a few posts ago, Pro Alloy advised that it was probably an air pocket nullifying the pump but I was fairly sure I'd bled it all through as much as I could. In a final act of desperation I disconnected the feed pipe from the header tank and fed it into a cup, set the pump going and then put my mouth(!) over the top of the header tank and blew into it. My ears popped, then a second later the tone of the pump changed drastically immediately followed by a splutter and then torrent of coolant coming out into my cup. Quickly re-attached the hose to the header tank, job done. Now getting a really healthy flow around the circuit.

With the charge cooler now fundamentally working I could get to work tidying everything up, routing wiring properly, actually bolting the charge cooler to the car, etc. Lots of small jobs signifying that the end is nigh.

Of course I had to spend a bit more money, I've never been happy with the silicone hose joiners on the intercooler as they're very short and I feel don't allow any tolerance for vibration/movement. From the OEM rubber joiners I've seen on stock cars I think they're about 1/2in too short so I got some new ones bought. 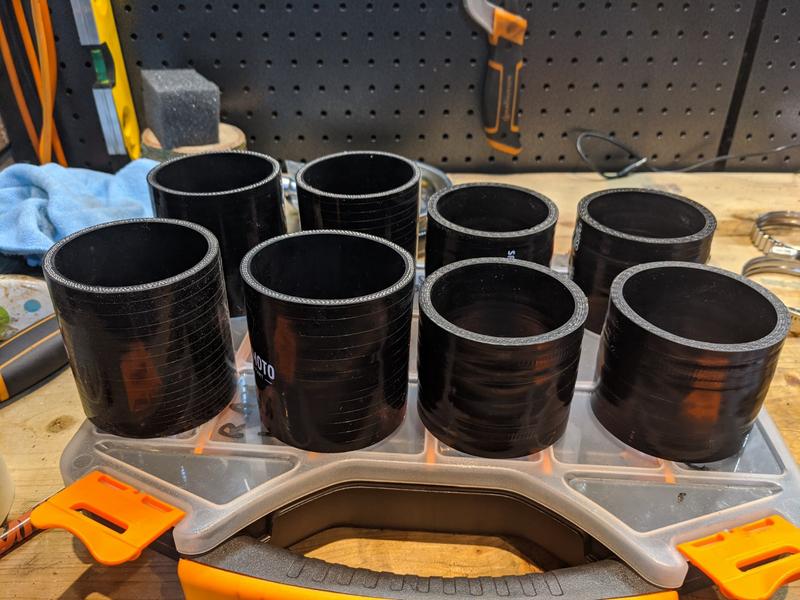 These have made a huge difference to how secure the boost pipes now feel, not only are the joiners longer but I think the old outgoing ones were also marginally too wide as the new ones are a much tighter fit... honestly think they'd hold boost now without any clamps! 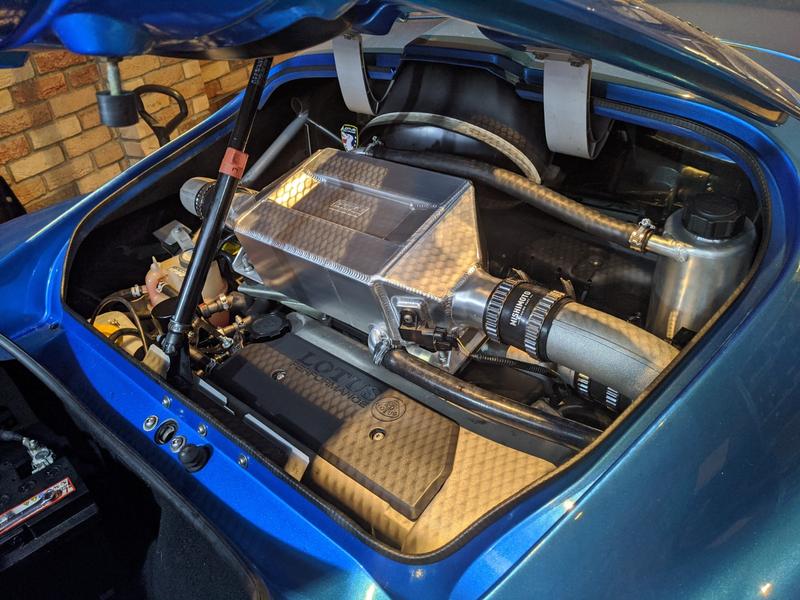 The aesthetics of the install are growing on me, ultimately it's a great big block of aluminium on the top of my engine so it's never going to look amazing - but it's about as tidy as I can get it now.

The last remaining major milestone before the car would be road worthy was to refill the brake/clutch fluid system and bleed. This is a pain in the arse at the best of times but with the system effectively empty due to a prolonged period without calipers attached, I was expecting even more of a fight. 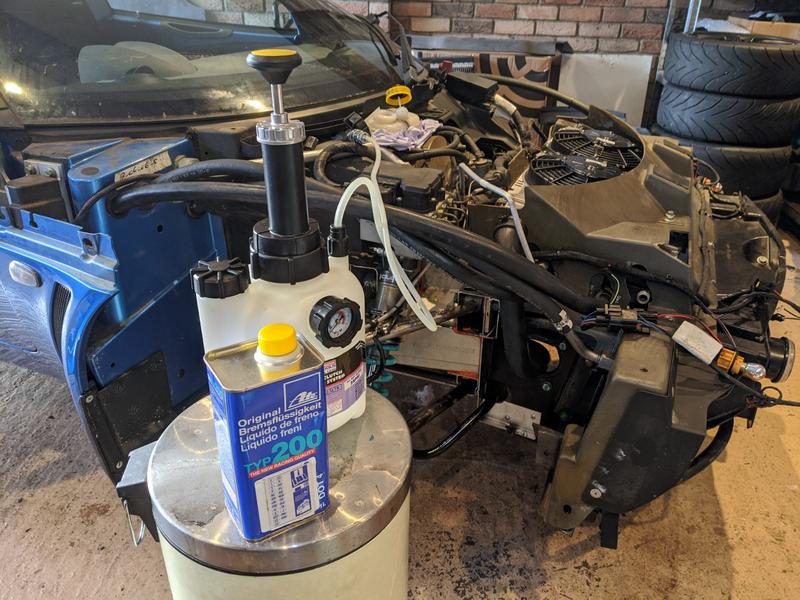 Pressure bleeder helps a lot, and after 1l of fluid I've managed to get the clutch working again and I've got just about enough brake pedal to manoeuvre the car around the street - but no serious driving yet. I'm going to see if I can activate ABS at some point in the near future, then give it one more bleeding session. (probably after the clam goes back on)

Whilst tinkering on the brakes, I replaced the secondary part of the handbrake cable. I had the same issue on my Elise, the wishbone hangers wear through the rubber and the cable gets rusty, then starts expanding - eventually to the point it catches on the inside of your wheel rim whilst cornering. It didn't get that far yet in the Exige, but it's on its way. 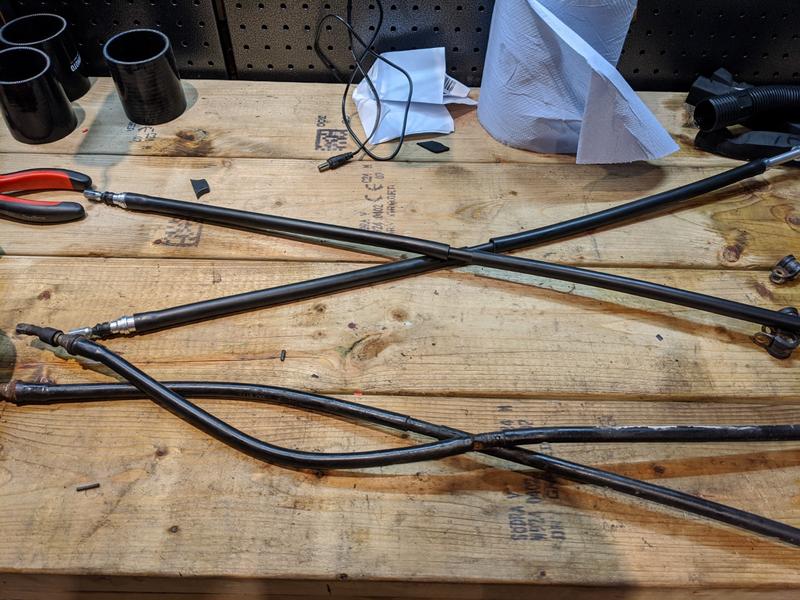 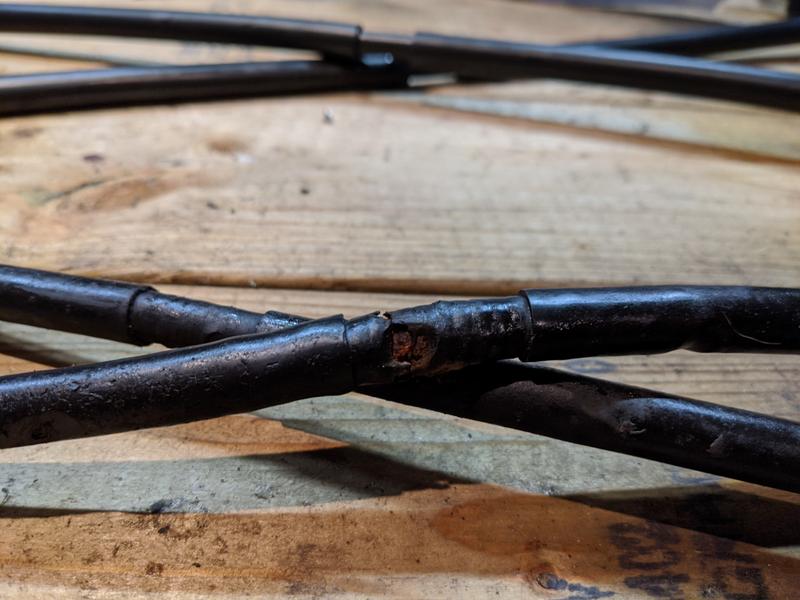 Whilst at it I cushioned the offending wishbone hangers with some tape.

The clam can't go on until I get this AC pipe sorted, so that's pretty much now what I'm waiting for - which means the jobs I'm doing in the garage are getting more and more ridiculous. Highlight of the morning was re-taping some wiring loom that was looking a bit tatty: 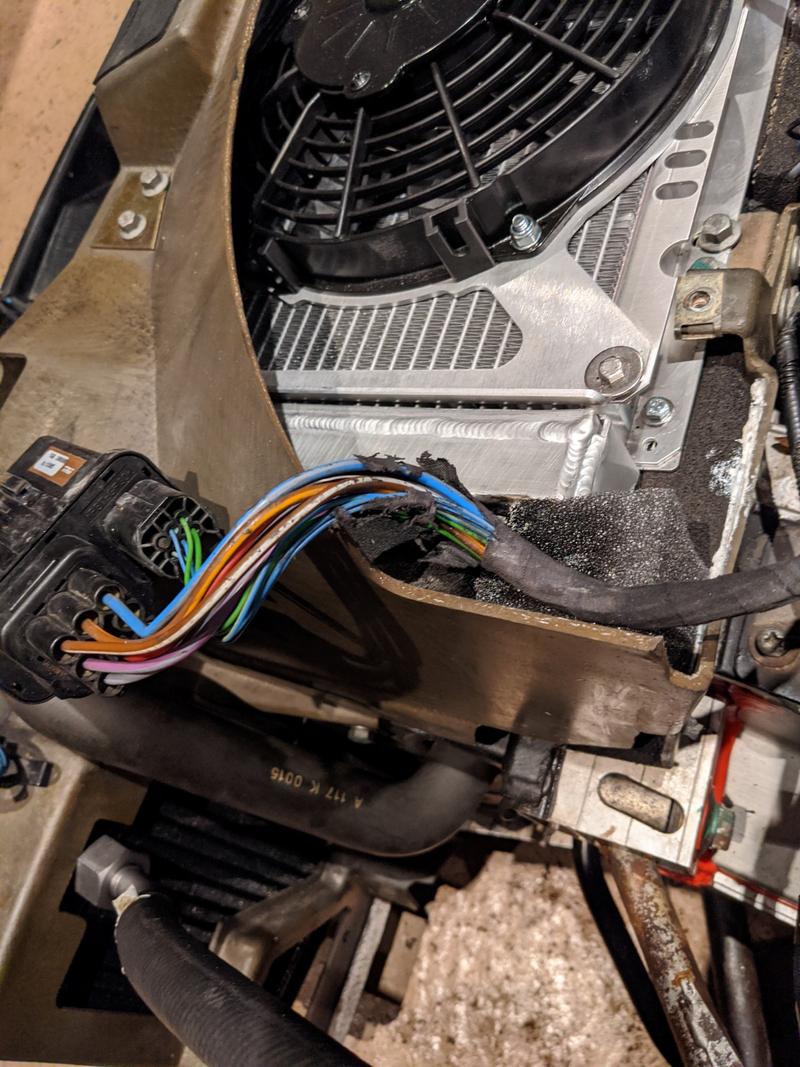 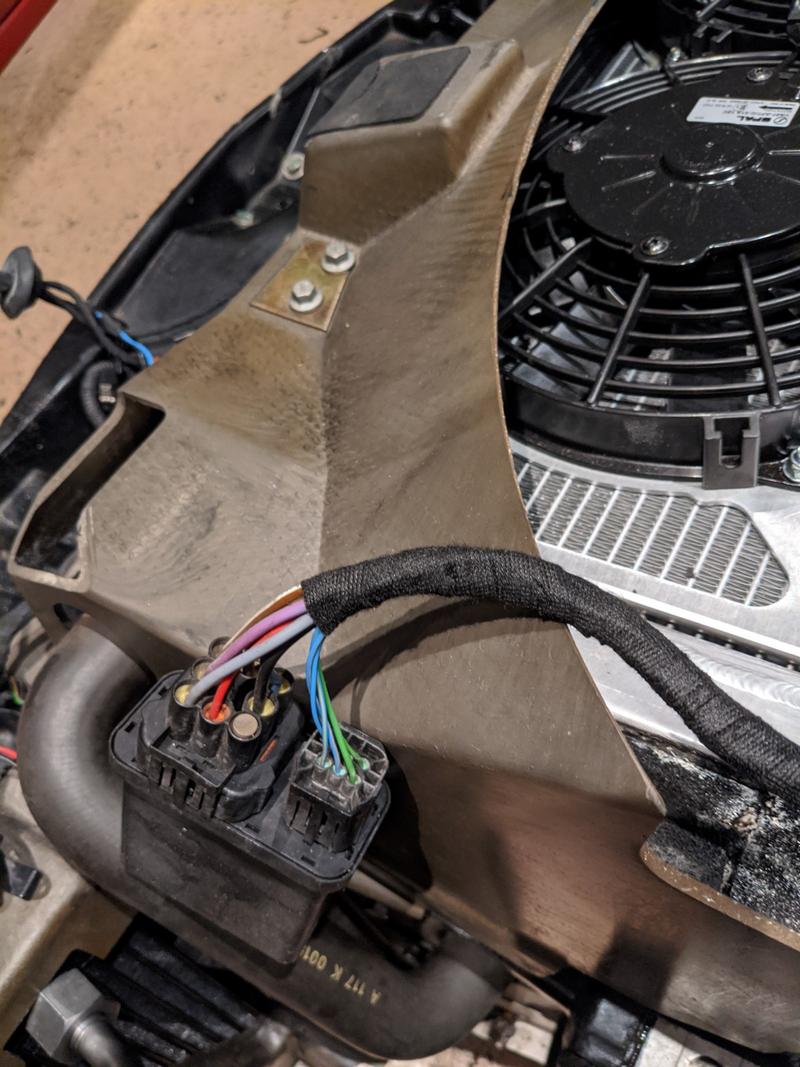 I've also been p-clipping the shit out of everything. After fitting stainless hoses the factory clips for the ABS wires will no longer fit, so fitted some p-clips there to secure them: 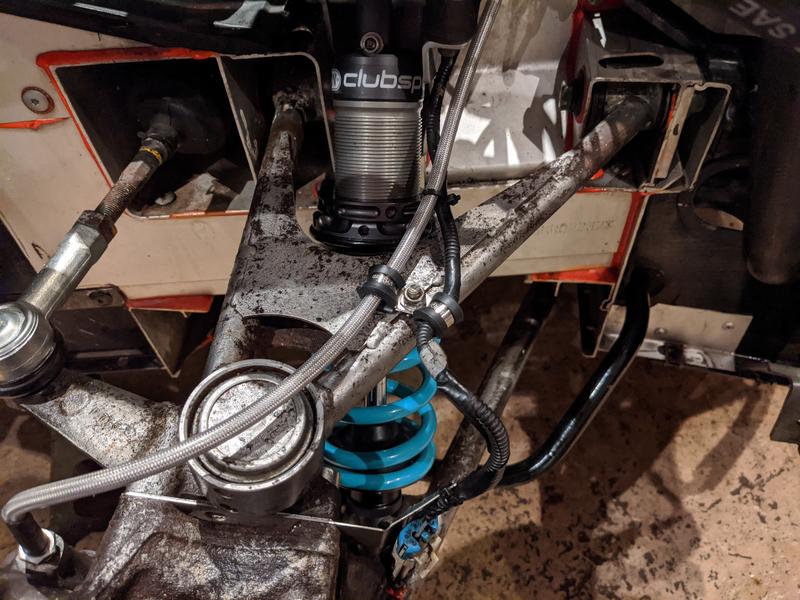 Par for the course with Amazon Prime, I couldn't just buy the 2 p-clips I needed so I ended up with an assortment of 100... so I've now been going back over any questionable wiring that either I did myself (such as during the gauge install) and securing stuff nicely with p-clips. So many cable ties now in the bin!

Finally I lobbed some new spark plugs in, old ones looked ok but I think they're 8 years old now from what I can see in the cars history. That's only 8000 miles (5k of which I did myself last year

Next update will hopefully be AC related, and then the clam can go back on. Woop!
Top

Out of curiosity what clamps do you have?
Top

Have a bit of boost leak paranoia from my Subaru days. Used to blow hoses off left right and centre on that

Have a bit of boost leak paranoia from my Subaru days. Used to blow hoses off left right and centre on that

Mine look shite so want to make sure they are sealing correctly. Thanks for pointer

WIll be off out tomorrow to measure!
Top

just make sure you leave enough gap between the pipes and the charge cooler, god that vibration took me an age to figure out!
Top

ade wrote: ↑
Mon Jan 27, 2020 11:30 am
just make sure you leave enough gap between the pipes and the charge cooler, god that vibration took me an age to figure out!

No charge for the modifications, not even an admin fee 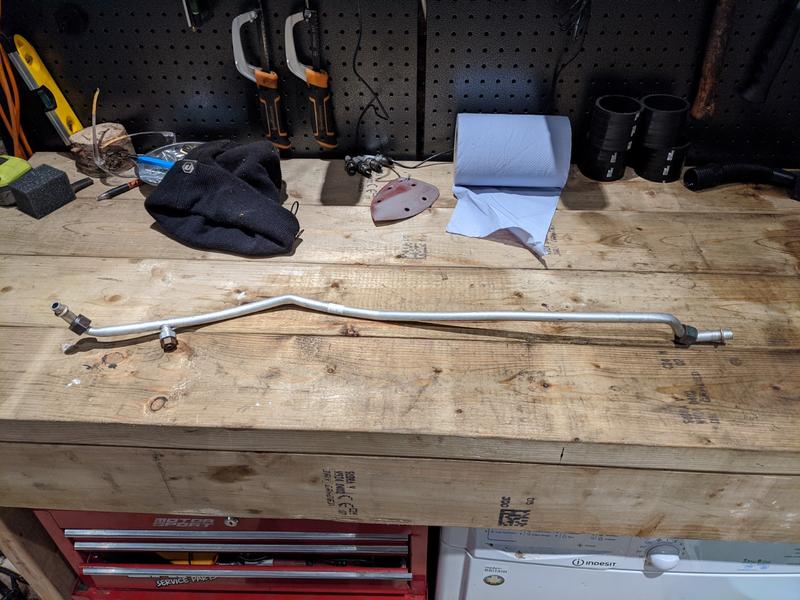 Elise-Spares came good for me, they had one from a race car they've prepped and only wanted a nominal fee for it because the pipe had a bit of a kink in it and wouldn't be a straight fit.

Due to my CC pipework, this pipe was always going to require some gentle manipulation so the kink didn't bother me too much - just need to be delicate and not break this one!

Offering it up to the car has identified an issue with my CC pipe routing, as I expected. I've got a backup plan (inspired by Ade) to put some 90degree elbows in and run my pipes slightly differently. 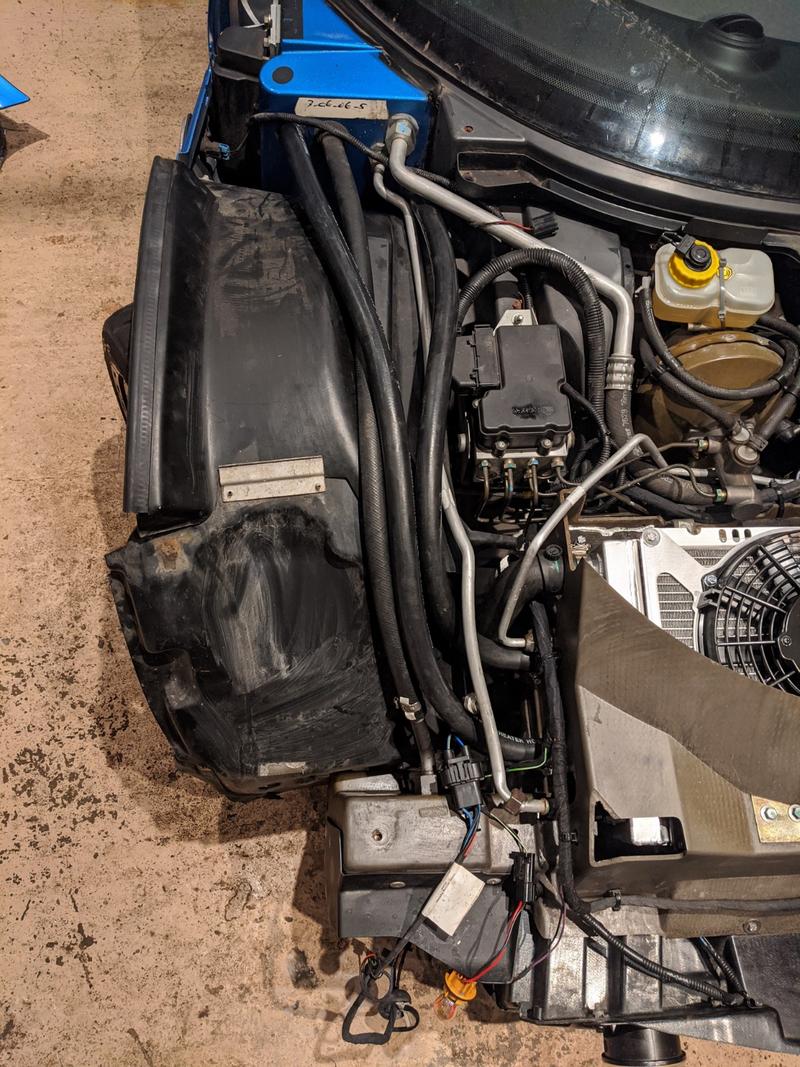 From the top down you can see the AC pipe roughly mocked into place. The rubber hose on the far right is putting a bit of strain on it, and the rubber hose coming in from the far left is fouling the pressure relief valve on the pipe. My plan is to run the far left hose more central along the wheelarch liner, with a 90deg elbow and then a straight run into the condenser. The far right hose I can tuck under the ABS unit a bit and run it tight along the side of the radiator shroud, again using a 90deg elbow to get it tidily into the rad.

Once those hoses are rerouted I should have a clear OEM run for the AC pipe. I've kept the AC engineer up to speed and he's got some fittings now, so he's going to schedule another visit round to either validate my new pipe or butcher it to make up a replacement that we're both happy with. Either way I expect to have functioning AC... Honestly though I wish I had bought a car without it, just to take the pressure off a bit...

Aside from this I've been trying to get my rideheight roughly in the zone. Just aiming for a 120f/130r for now to allow me to safely drive to a geo place once ready. My first random attempt had me at the following: 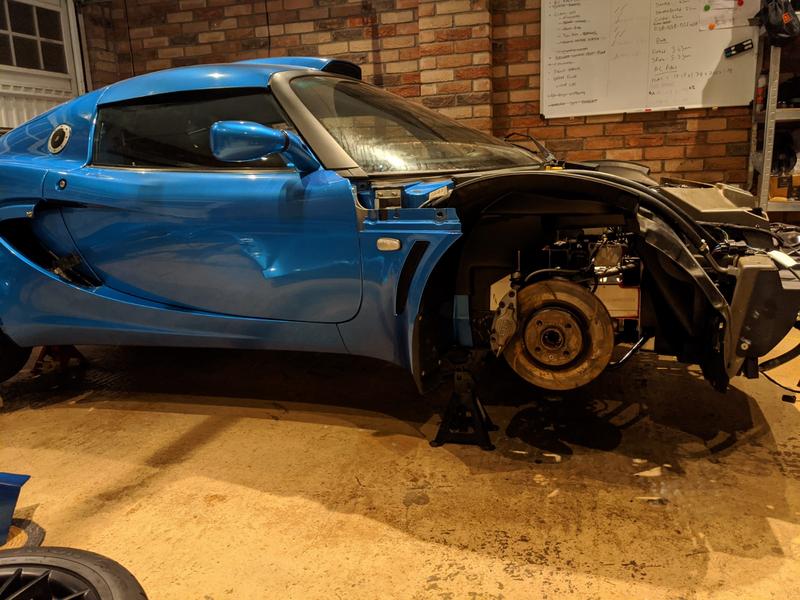 So not a million miles off! I was getting a lot of scrubbing on the OSF wheelarch liner though on full lock as the weight of the CC pipes is pushing it lower than it should be. Once it's bolted up to the front clam that should buy me some more space, and I hope to clip the hoses up flush with the clam too to take that strain off.

These are my rideheight tools, blocks of sponge cut off at the appropriate heights which I can slot under the jacking points. Sponge is good, because if the rideheight is "just" too low, I can still squidge it in and get an idea of how far off I am. Obviously this will all be corner balanced up so I'm not looking for precision, just a rough guide. 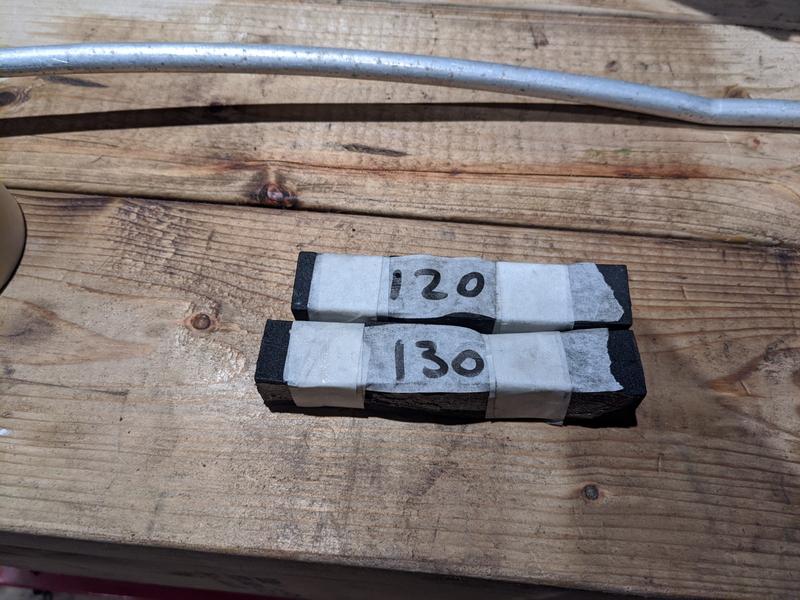 The car has also moved under its own steam for the first time since mid December. 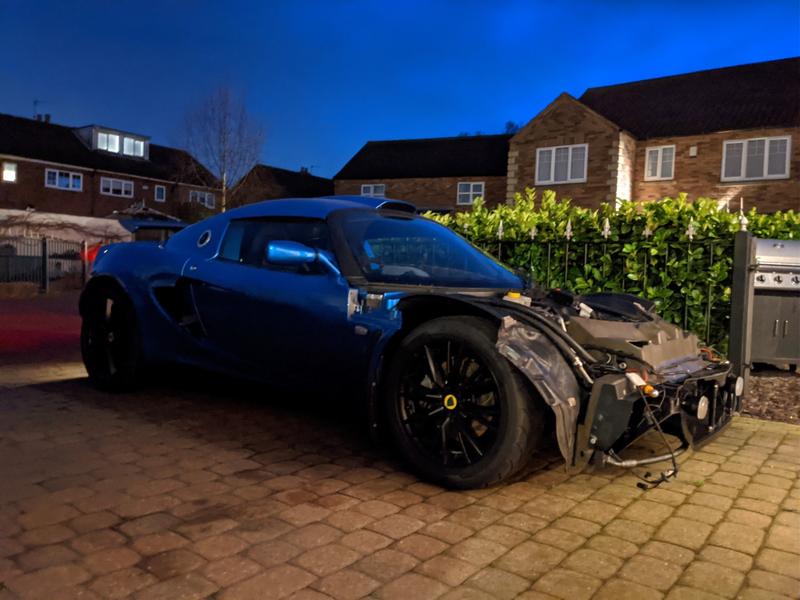 Backed it out onto the drive so I could sweep up and clean the floor a bit. Brakes definitely need another bleed through...
Top

Good idea on the sponge..
Top

If I spend enough time in the garage occasionally I stumble across a good idea. Sort of like the broken clock being right twice per day thing.
Top
Post Reply