Fans and owners of the Lotus Exige
https://www.exiges.com/

by andybond
I havent been on track yet, no. Its around 15mm lower at the front I think but as you alluded to I have stiffer springs than most. Ill revisit it in a few weeks to see if I have any scrubbing.

Bright lights mister. What have you got?

by Fonzey
Nothing special mate, not touched them since I bought the car anyway.

I tried all sorts of bulbs in my old Elise, never really made a significant improvement tbh...

by ade
Wearing out arch liners and the backs of the headlamp assemblies is standard on a track Exige, in the end I just cut what got in the way and ground off some of the headlamp back, I ran my car at 105\115 but had stiff springs on 46mm nitrons

ade wrote: ↑
Wed Feb 12, 2020 1:13 pm
Wearing out arch liners and the backs of the headlamp assemblies is standard on a track Exige, in the end I just cut what got in the way and ground off some of the headlamp back, I ran my car at 105\115 but had stiff springs on 46mm nitrons

Phew! Good to know @ade thats exactly what I have

by Fonzey
Yeah I'm ready for a bit of arch liner wear, as I say I had it on my Elise too - just want to give myself as much room as possible. With my car lowered onto its wheels in the current setup, I was getting arch liner contact going from lock to lock stationary which is not great - but when I last tested that the clam was not on, and so the arch liner wasn't screwed in its "up most" position. I'll test it again this week now I've got a clam on and if I can at least turn lock to lock without it scrubbing - I'll be happy to go get it on the road to align it.

by Fonzey
I'm booked in for Dyno (just for a general health check) and geo in early March, so I've finally got a deadline to stop mucking about.

I am pretty much done though, clam is all fixed on now and I just need to take the car out for a little run to try and force some air out of the ABS system before giving the brakes a final bleed.

I've picked a couple of bits and pieces up recently, stuff that was on my list for later in the year but both came up in classifieds/facebook groups for cheep cheep so I jumped on them both and might as well look to get them sorted too.

1. PC680 battery. Had one in my Elise, was always happy with its cranking power and ability to hold charge. I know these are a bit outdated now as you can get Lithium batteries that are much lighter, but they're still quite expensive and this was pennies from a local Lotus enthusiast who's about to retire his fleet. I think the weight saving is in the region of 7kg(?) which is half of my chargecooler penalty already paid for. 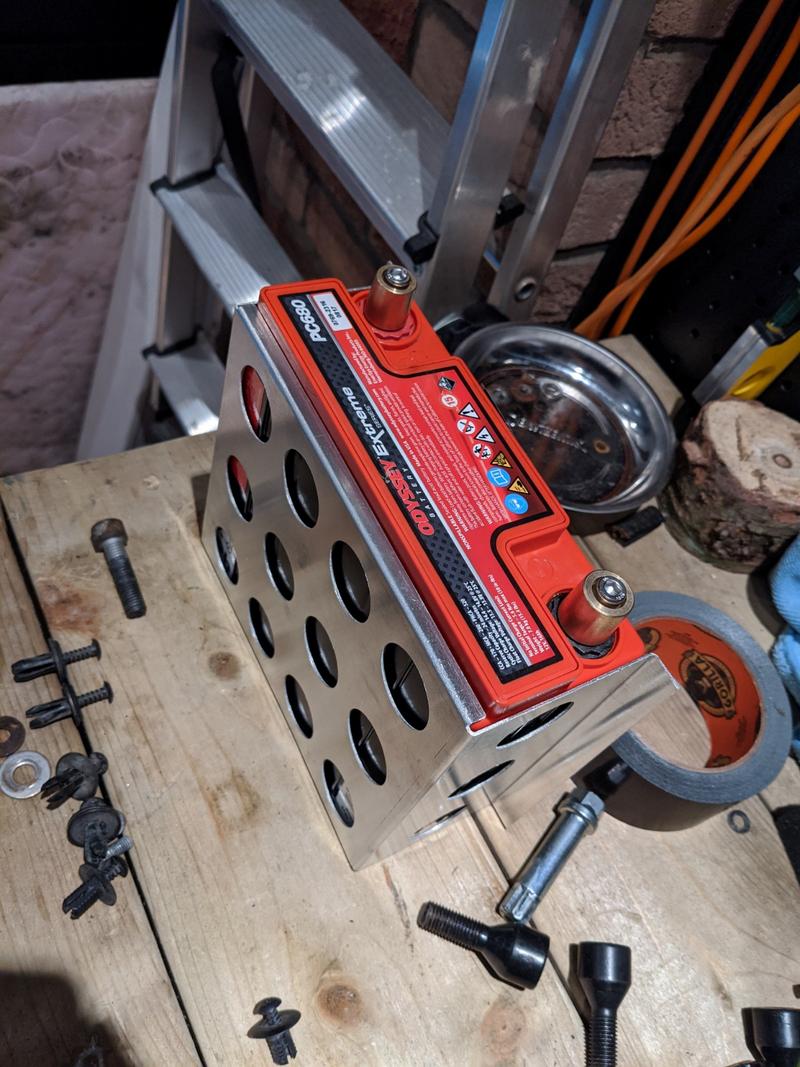 Similarly to my Elise I'll rivnut this to the boot and will probably stick a cut-off switch in. 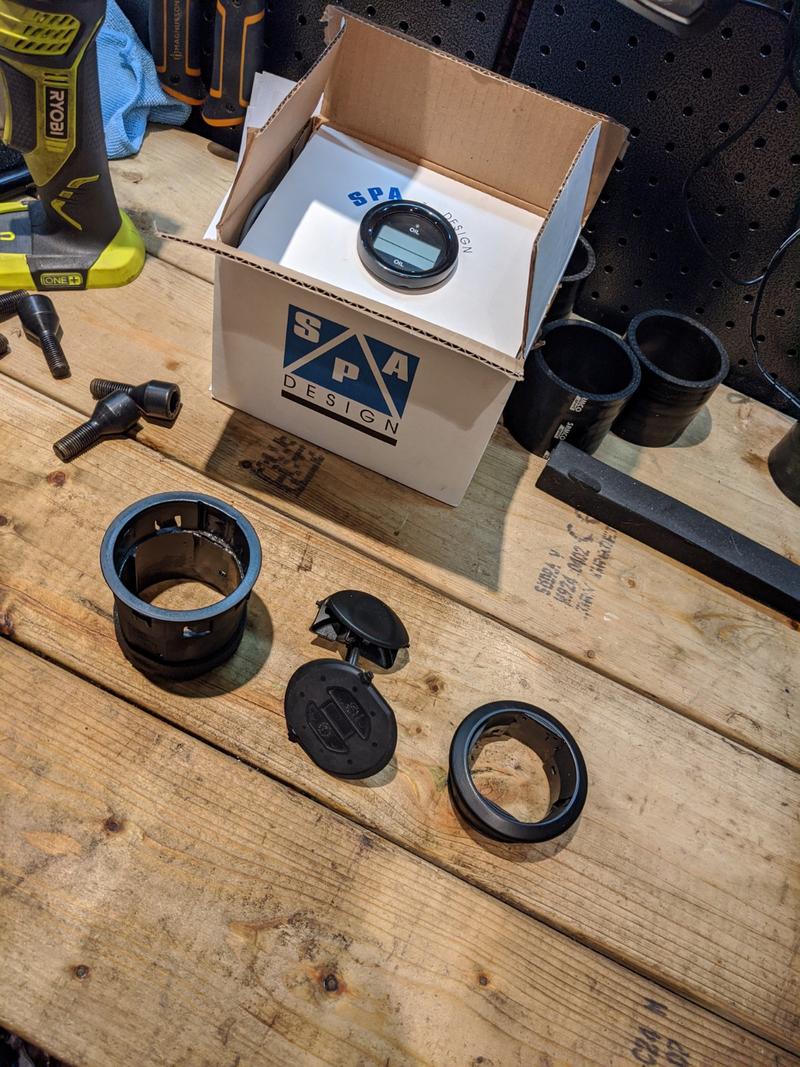 For anybody following the thread you'll know I installed a cheapish 3-in-1 gauge earlier last year, I picked it because it came with a known-good Lotus adapter ring for the air vent and I just needed something quickly to go with the install of my new sump. In all honesty that gauge is absolutely fine, and I should really just keep it - but it never had the aesthetic I was looking for, and it has boost pressure which I've never been too bothered about monitoring - so a large proportion of the screen real estate is hogged by a measurement I don't care about. 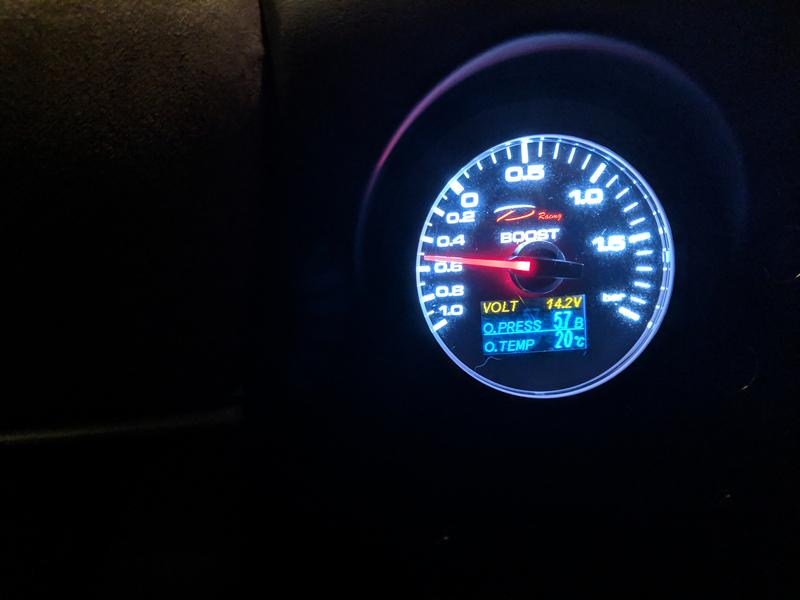 I'd had a SPA gauge in mind since the beginning, but it's smaller than the one I'm removing so something would need fabri-bodging to get it to fit nicely. I think I've got a plan now, and it should look nicely OEM once it's in. The back lighting is very customisable so I should be able to match the orange of the OEM stack, and it has added functionality of low/high warnings and the ability to feed an external warning light/buzzer which may be a nice addition for oil pressure in the future.

The sensors are the same 1/8npt as the ones I'll be removing, so other than dribbling a bit of oil on the floor I should be able to swap it out without too much aggro.

by andybond
Thats SPA setup looks familiar , as does the battery

by Fonzey
Do you have this gauge too, if so is it vent mounted?

Yep! Exactly the same. It is vent mounted as well.

by Fonzey
Excellent, at least I know it'll fit! I assume it was fitted to your car before you bought it? I don't remember it from your thread, but I may have missed a page or two.

I got in from work a little early today so took the opportunity to take the car up and down the lane to try and trigger ABS so I could do another bleed. I had a slight problem with that plan, in that ABS isn't currently working! I've got the ABS light on permanently and it didn't clear after a few yards of driving (which it normally would after confusing the wheel speed sensors on axle stands) and I couldn't trigger it for the life of me.

So either this is because the ABS system does indeed have an air pocket, or I've picked up some damage to one of my wheel speed sensors (the latter I've experienced before at Blyton, so I need to check my previous repair).

If it's the former, I don't know what my options are other than driving it to Lotus and letting them plug their scan tool in to cycle the ABS solenoids.