This is where we proud owners can upload information and pictures of our pride-and-joys (their Exige that is..)
Post Reply
866 posts

You wouldn’t happen to be able to view your ECU’s params would you? Do you know what the advance is set to for cranking? Maybe fuelling at around ambient temperature? No worries if it’s a hassle, just feel like if I had another to compare to I’d be able to get mine better fairly easily

Suppose I should just be more patient and ask The Hornet!

With my RS232 --> USB cable that I plug directly into the ECU and with my software can read every parameter?

I’m really after cranking ignition advance and cranking fuelling at ambient temperature - but no worries if it’s too much hassle (and sorry to Fonzey for the thread derail...)

Mine is now supercharged, so not sure it will be the same, but will see what I can find out... could you not give RRR a call.. sure they would be able to advise ? (again sorry for thread derail @fonzey)
Top

Already tried one remote session with RRR, helped a little, but just not right....
Top

Dropped the gearbox oil and engine oil this weekend, well that took an hour - and then thoroughly degreasing my floor, underside of my car and pretty much all of my possessions (including the cat) to get rid of the gearbox oil smell took the rest of the time up...

Here's my new drain plug for the gearbox: 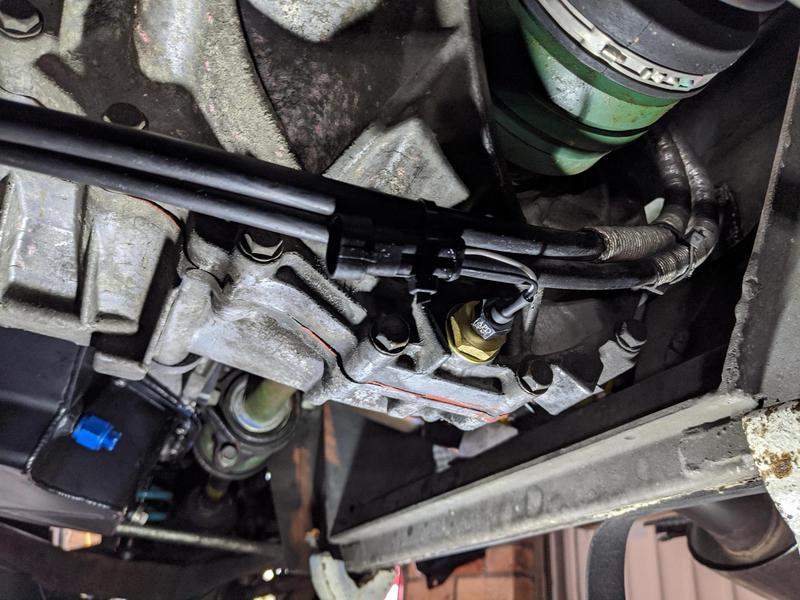 Sensor is just cabletied up out of the way for now, but once the EMU goes in I'll have it hooked up and reporting gearbox oil temps. Based on what I see will influence what happens next, but I'm fully expecting to be dropping the oil again in the near future for an oil cooler install. If anyone has any pictures of a gearbox cooler install, I welcome the inspiration for packaging/positioning etc.

While I had the car up in the air and I was making a mess I decided to tidy up an element of the charge cooler install.

I previously had the pump mounted along the bulkhead trim which was nice and tidy and made for a short wiring run. 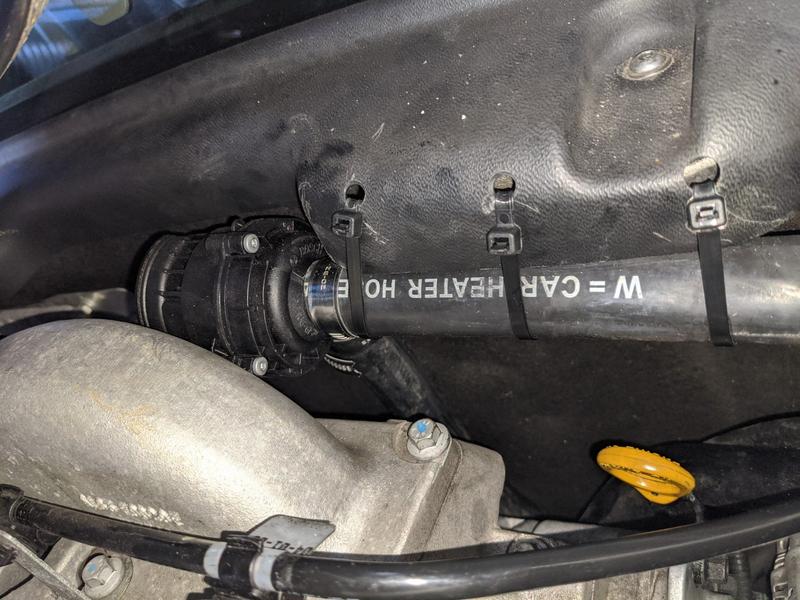 The downside to this was that the lowest 'drain point' I had at the rear of the car was essentially the header tank - meaning any work on the charge cooler system just made a massive mess, filling my alternator with 5 litres of coolant isn't something I wanted to be doing too often... Clearance between the pump and SC was also very tight so I was a bit nervous about engine movement damaging the pump (lack of witness marks suggests that wasn't an issue in hindsight).

I also had a bit of a window rattle at certain RPM, so I had half a suspicion that the pump was causing it.

As an alternative location there's loads of room in the side pod/rear wheel arch area so I thought by moving it down there I could retain easy access for maintenance but also give me a convenient place to drain the system if I need to. 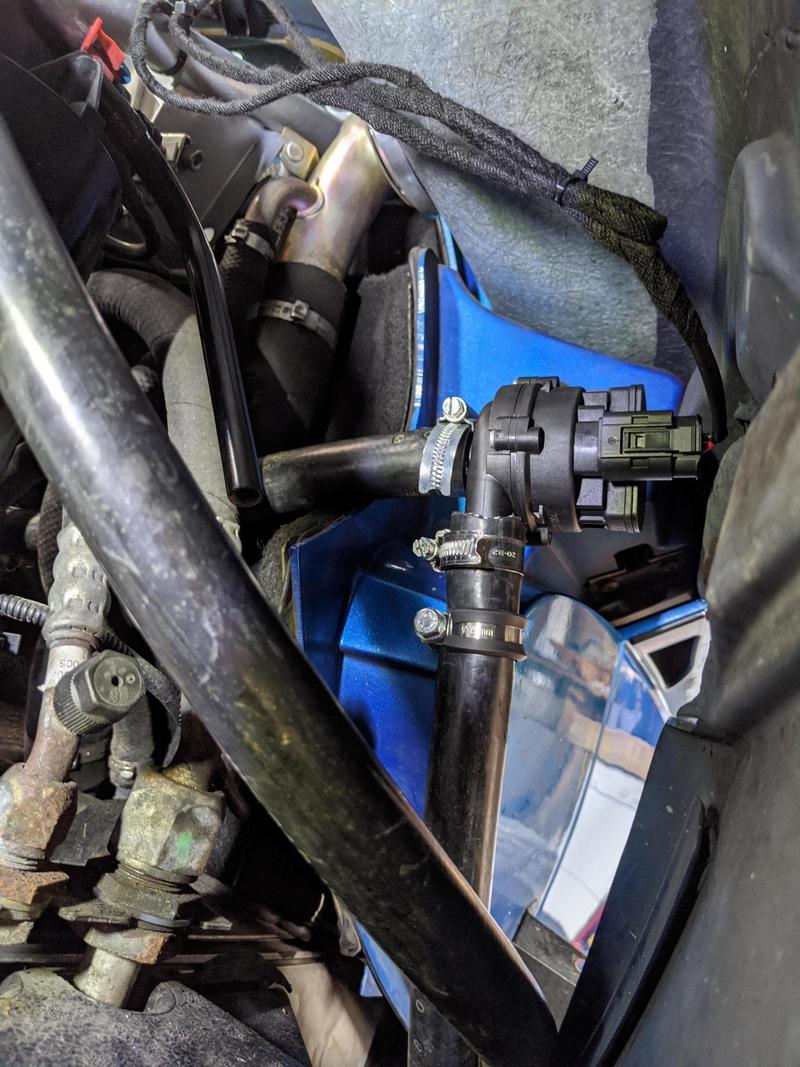 I had to extend the wiring a bit, but no big deal there (as you can see I over extended it a bit...). Conveniently there was a clam fixing bolt right in a good place for a p-clip on one of the hoses, so made use of that.

The good side to this, my window rattle did indeed get fixed - so pretty chuffed with that. The downside is that the whine from the pump became very audible all of a sudden, not helped of course by the fact the pump was effectively mounted to my lug 'ole. You could just about hear the pump over the engine idle and it only took a short drive to get annoyed by that.

Luckily the fix was an easy one, I picked up some M6 isolation bobbin things and mounted the pump via one of those. The pump is now inaudible with the engine running, and has the added benefit of adding clearance between the hoses and the bodywork. 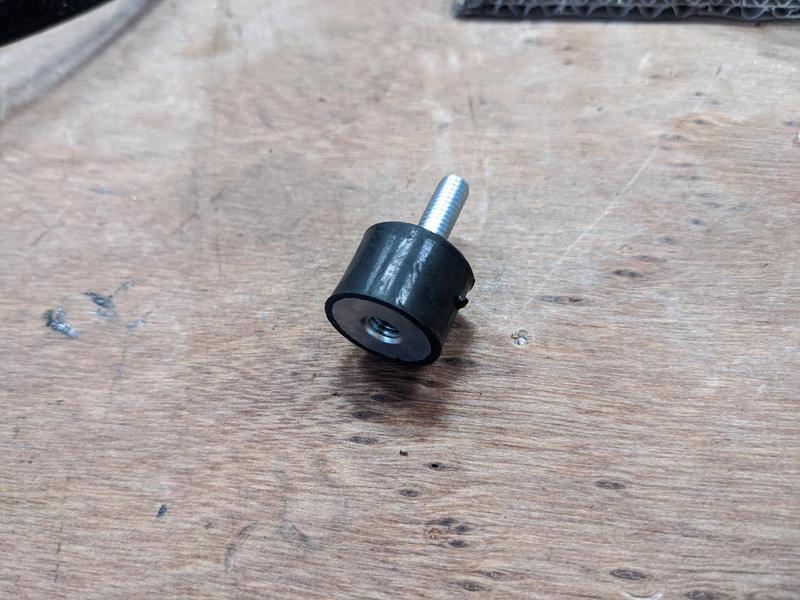 Pump can now be unbolted/drained from the side pod if needed (don't tell the local chavs that).
Top

I'd actually be a bit nervous using t-bolt clamps for this, the pump nozzles are only plastic and it's harder to gauge tightness with them IMO.
Top

I picked some new(ish) 225/45/17's up for the rears this weekend. Got in touch with a lad who has a tyre bay near Sheffield and he buys a load of Avon ZZRs from various race series' that have done a session or two.

I know part worn tyres are a bit of a controversial topic but I've bought them pretty much exclusively since I started doing trackdays, so I've normalised it in my head helped by the fact I've probably saved 5 or 6 grand in that time

... Got 4x 17's for £280 and they have just under 5mm tread on the inside shoulders and just under 6mm on the outer edge, so barely used at all. Also date coded late 2018/early 2019 so no issues there either. My last set I bought part worn with a 2016 date code and they've lasted me about 12 months and 6 trackdays, so it works out pretty decent.

The only thing I'm not sure about is whether to keep the two spare 17's that I bought for next year, or sell them on now - as they're also dated 2018 (albeit late 2018) they'll already be 2-3 years old by the time I come to need them.
Top

Whilst messing around with my chargecooler plumbing I noticed something odd with the nose bracket on the supercharger, in that it didn't seem to be attached to anything.

It's really well hidden and incredibly hard to see without sticking your head in the sidepod, but I snapped a photo with my endoscope: 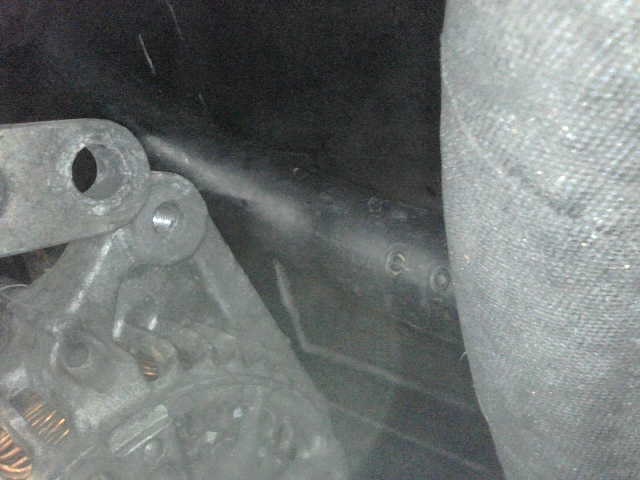 I initially assumed there should be a small bracket between this bracket and the alternator, but thanks to confirmation from @seriouslylotus I realised the alternator must have swung down from its proper position. Luckily the belt tensioner must have taken up this slack in its stride, but certainly this wasn't right.

With the car jacked up and sidepod off I got a better look. 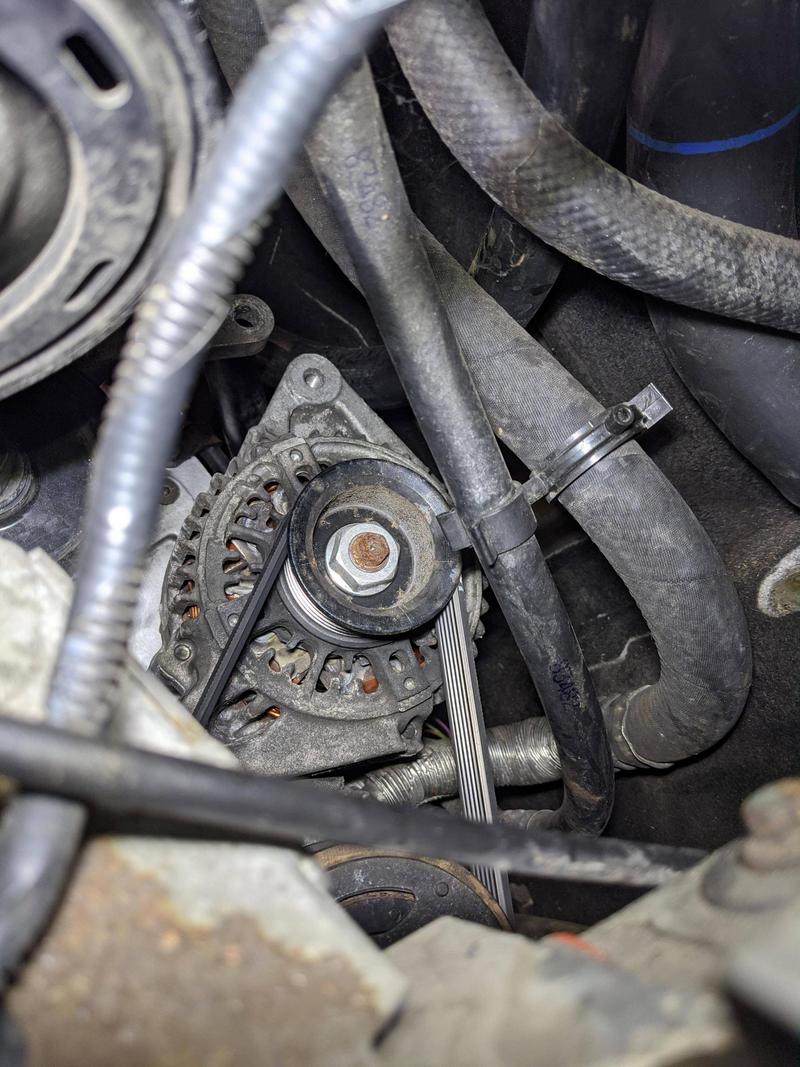 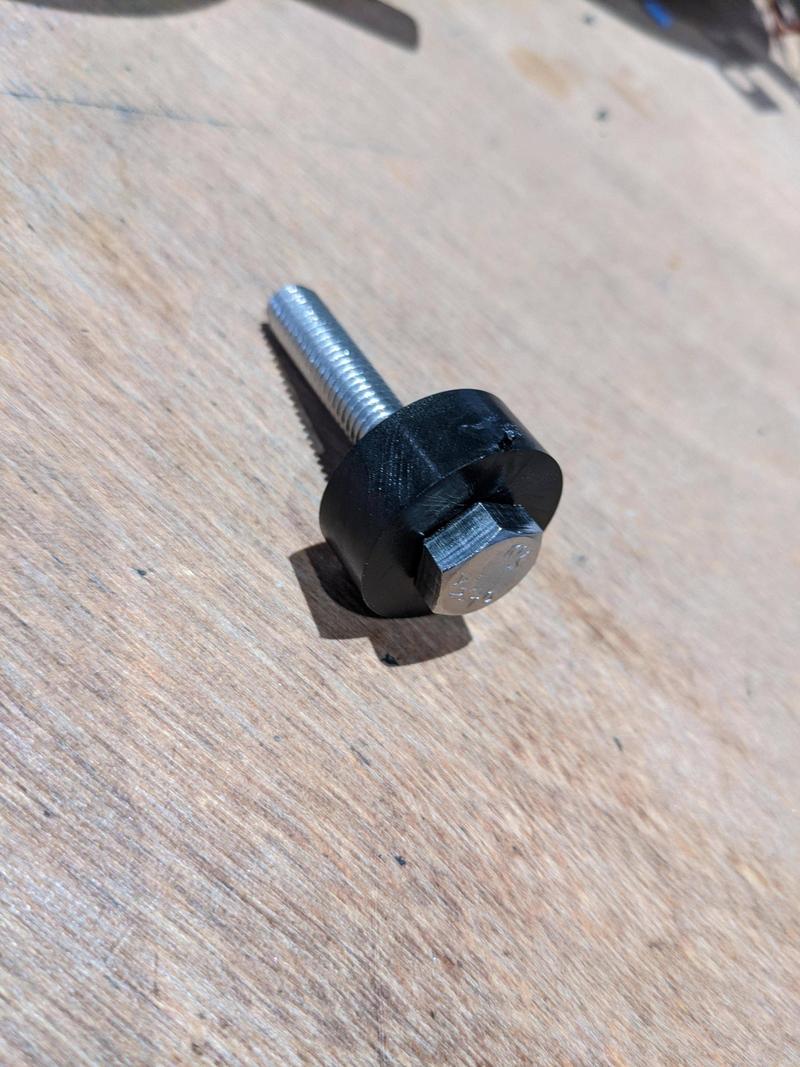 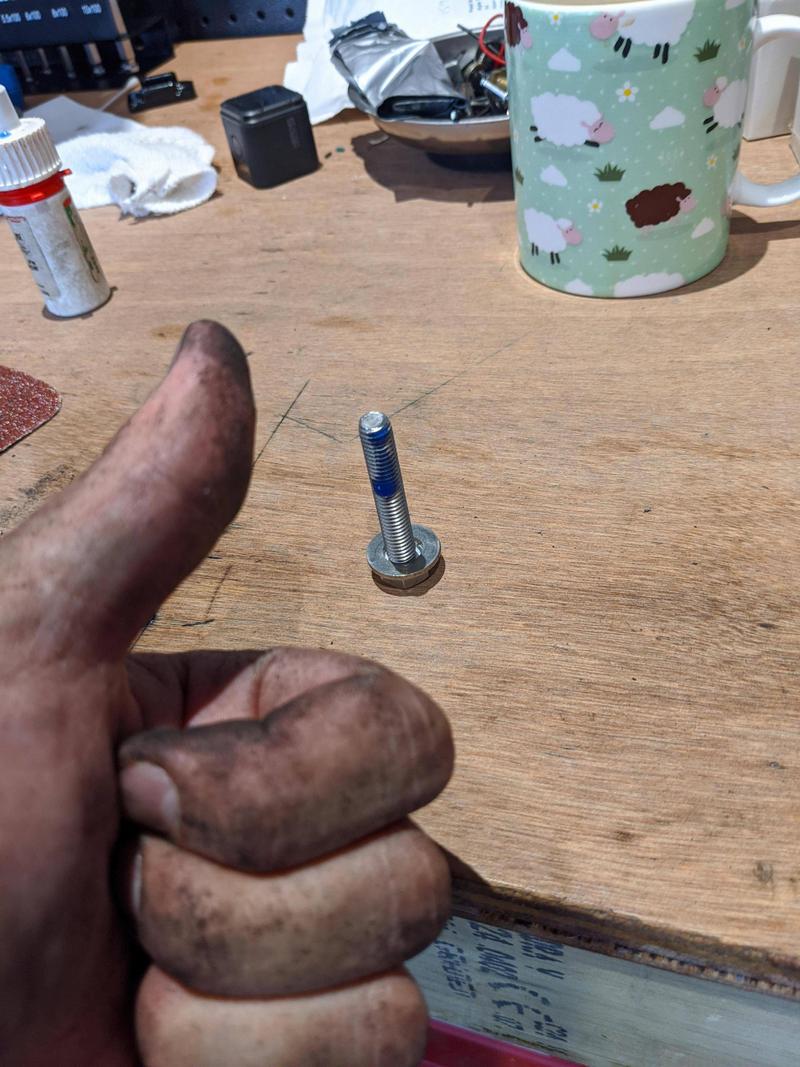 When I took the belt off the alternator, it had no free movement in it at all - so it wasn't flapping around around the axis of it's one remaining bolt - but I guess the strain on the belt had gradually over time pulled the alternator down to the point where it can't go any further (as there's engine in the way) which probably aided the tensioner in gradually taking up the slack. Had this suddenly have flapped down I'm sure I'd have lost a belt at some point in history.

I loosened off the bottom bolt and it was fairly easy to slot the spacer/bolt in and tighten everything back up again. 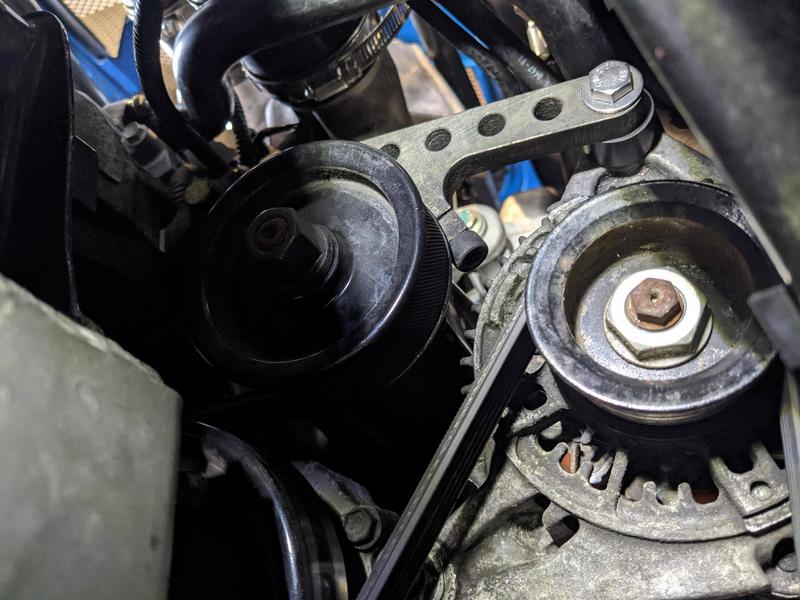 Getting the belt back on was much harder than I remember from previous jobs, so I'm certainly working the tensioner harder now! How this came to happen I'm really not sure, it's such a hidden area of the engine bay that I probably don't have any old photos to check back on (though I will check...!). The car did get a new supercharger back in 2012, the circumstances around that I'm really not sure but perhaps it was never fitted properly? Or on the other hand the bolt could have fallen out last week, I really can't be sure.
Top 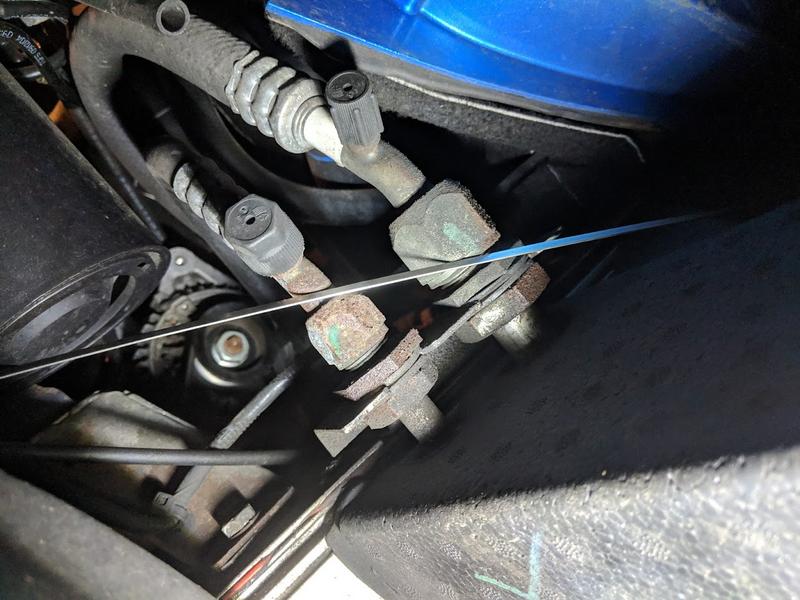 That's a pic I took when I first bought the car, I dropped the dipstick and spent hours looking for it - it turns out it had landed in my sidepod...! Anyway, alternator still sat there chillin' on his own...