Planning a get-together, or want to tell us about a track day ?
Post Reply
65 posts

You and Sean were fast MAN

For me it was the ultimate track day trip. If you haven't done a BaT Euro event, you must! The company was obliviously brilliant and BaT did a stratospherically good job looking after the cars and the attendees, a MASSIVE thank you

. Great catching up with Darren and Helen in there S2 again as well as meeting lots of new faces. I'm stilling coming down from this, it was fricking AWESOME!!!
R300
Top

Were all the cars transported by BaT? Not sure I'd want to do the mileage between tracks in my Clio
Top

Nice lap Dave. I knew that wasn't me you passed as that guy actually used his mirrors and moved out of the way

A million thanks to the BAT ferret crew for letting me Loose in their weapons at the HOONgaroring. As you said, what a track

and what amazing cars, it was sensational fun. Totally fabulous to catch up with you boys as well.

I just watched that video clip while I'm sat in Budapest airport with my gear in the helmet bag as carry on luggage. Makes me want to turn round and head back out to the track!
Top

Thanks for that John, some smooth laps from you

After watching that replay i'm taking the positives...there's a LOT of opportunity for me to improve! it looked like I was driving a MKII Escort in the Forest

My 15 year old told me which track it is after one corner. I did have a bit of paper over the title so he could not cheat, I think he spends too much time on Forza.

Lol us Ferrets have discussed your aggressive nature Wes after watching that vid. I totally screwed up my best lap at the end there

So my blog style commentary on the trip kinda dried up eh! We were all having such a good time and with time and energy short when I did get back to the hotel room then my best intention of writing more got forgotten. Anyways, just to write a few more thoughts and share some pics....

So here are the cars, primed and waiting in the pit garage at Slovakiaring. Well when I say primed,..we had to change out of the wets that went on for Brno to suit the dry conditions of the day. 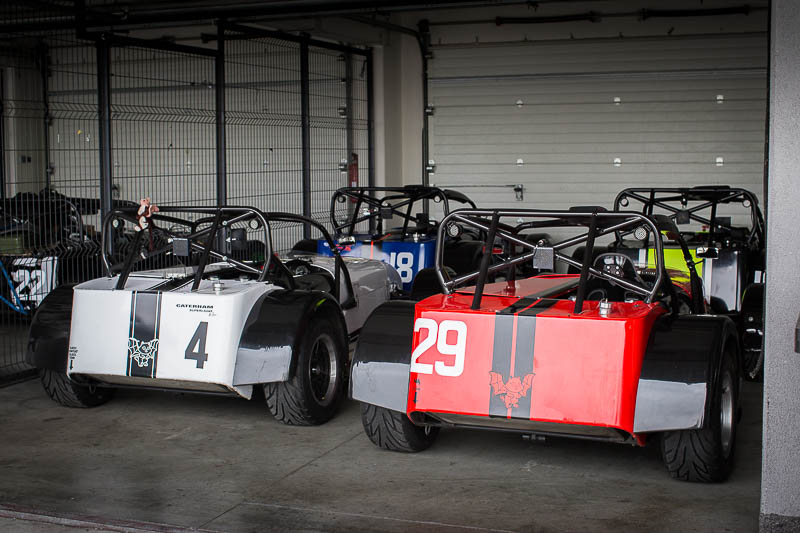 Love these little cars. You can see the tread pattern difference between the Avon Turbospeed that Dave runs in the wet vs the ZZS on mine. The Turbospeed certainly finds more grip when it gets really wet. Dave and Sean can be seen in the background changing tyres,..well you wouldn't want me with the spanners on your car would you 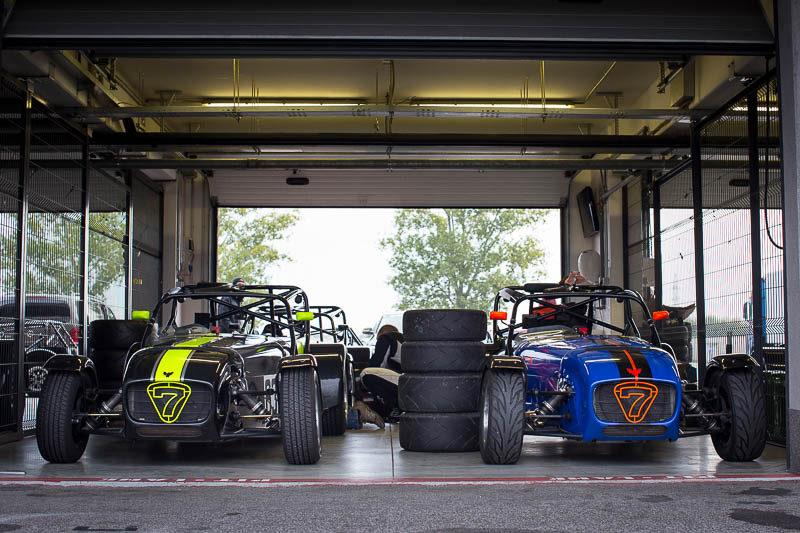 The Bat Ferret has to ride with whomever deserved it from the previous event. Quite rightfully he was with me at Slovakiaring after my gravel incident at Brno. Yeah its all a bit childish but more people took pictures of the sodding soft-toy on the cars than of the cars! 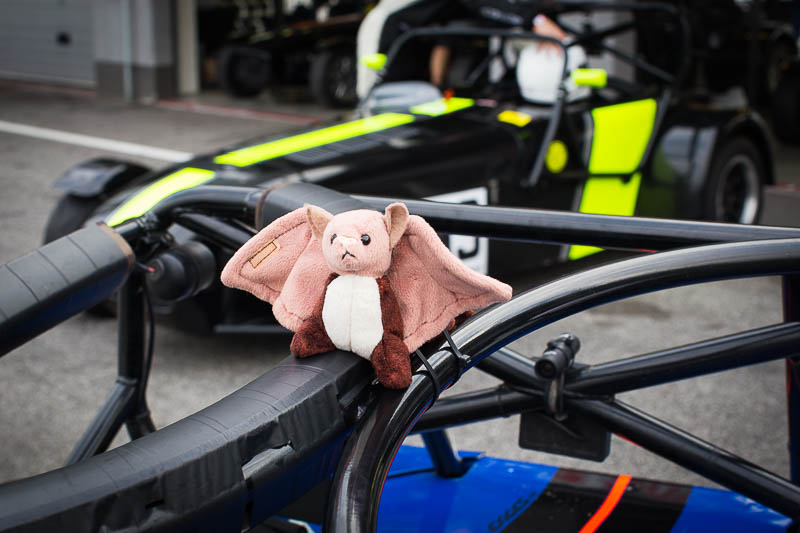 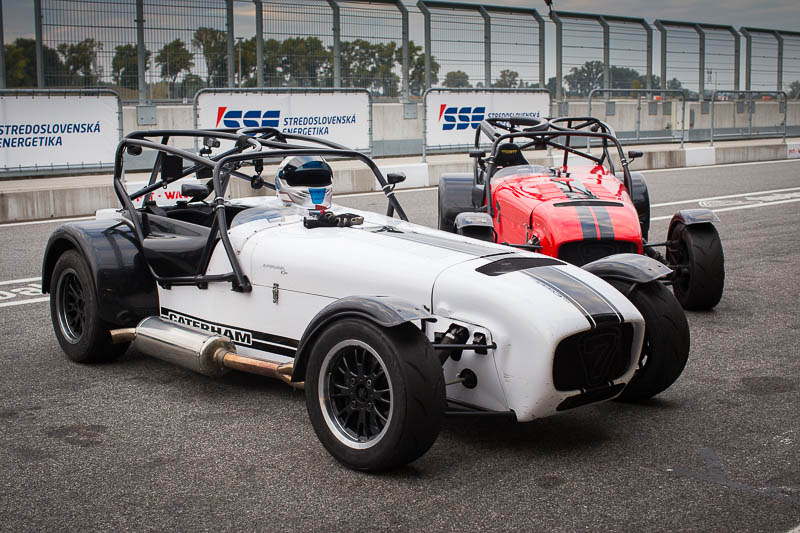 The circuit itself was very fast and technical. Its pretty featureless apart from some (introduced) elevations in the middle. I got completely disorientated on my first session and was thinking 'how have we not crossed the start/finish straight, I'm lost'. It was a great circuit but I never fully gelled with it. Maybe I was tired, maybe I'm just useless at learning circuits, I just found it very hard to get my head around. My car still looked good on it of course, popping a flame on upshifts 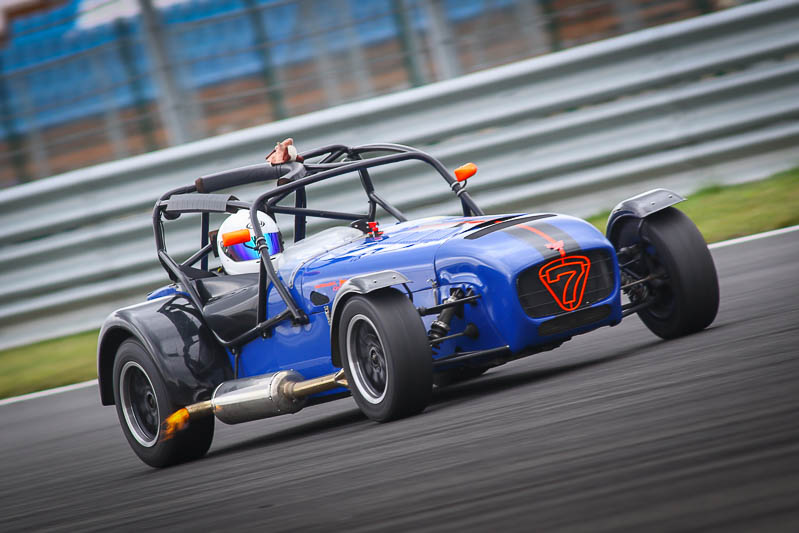 There was a Skud missile or summat and some military vehicles next to the circuit entrance. As we left, Sean drove across the grass for a photo opportunity of the tour bus and the lads posing with a small chopper

We resisted the urge to put Bat Ferret stickers on the missile even though that urge was strong! 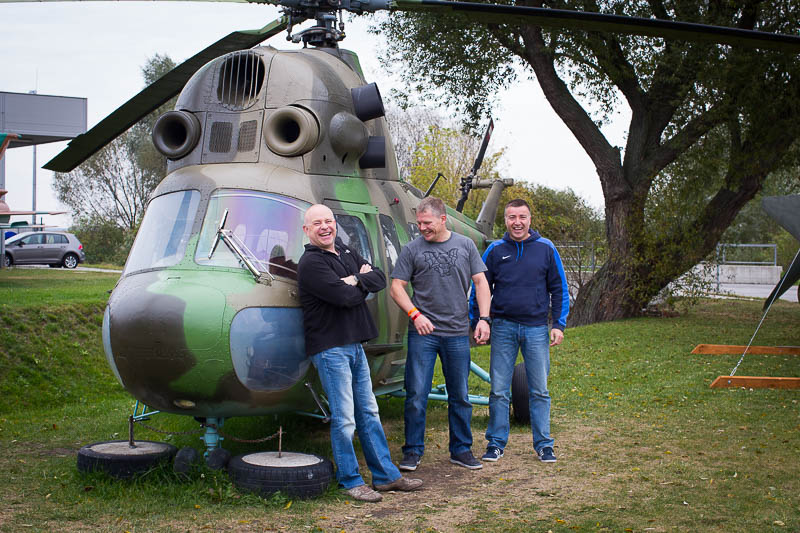 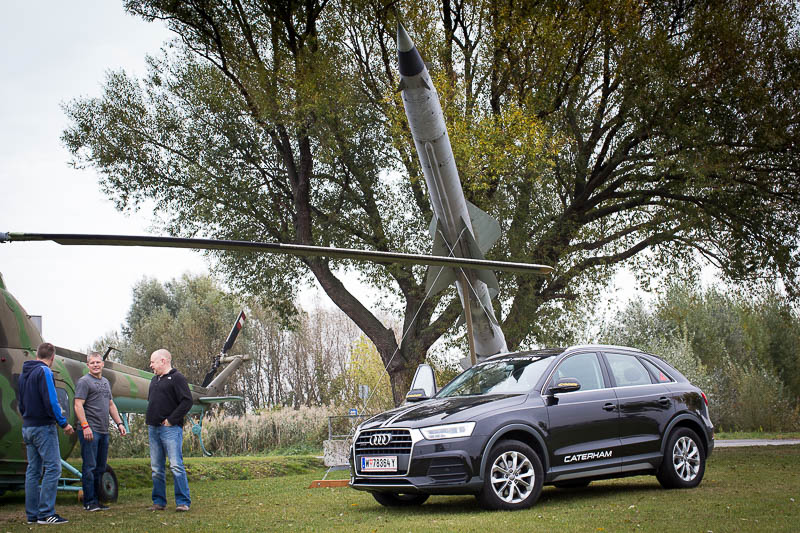 We drove straight through Budapest and headed straight to the Hungaroring. WOW, what a circuit! The Lotus Cup Eastern Europe were testing there in prep for their race on Sunday, so yay you get some pictures of Exiges and other Lotus on the Exige forum! Interesting that looking at the results from qually/race on the Sunday that the Evora GT4 that won was putting in similar times to our R300s....well when I say 'our R300s' I mean Dave's

Just shows though, they are properly quick little beasties. 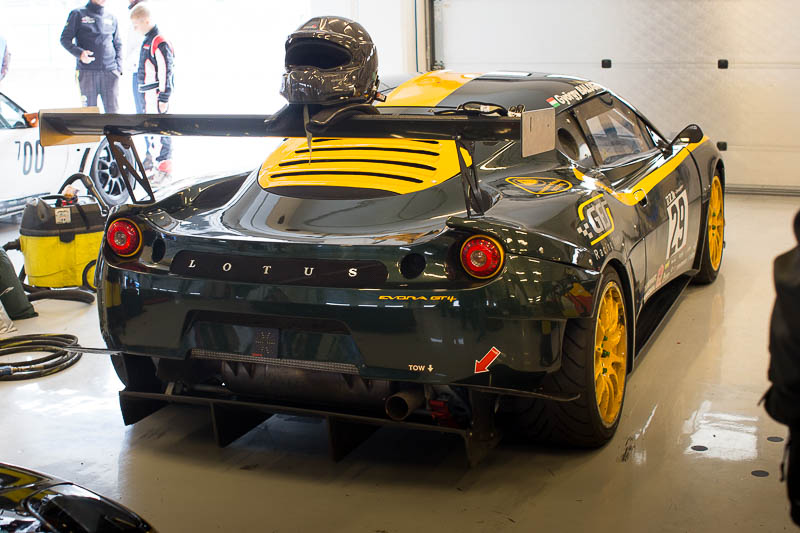 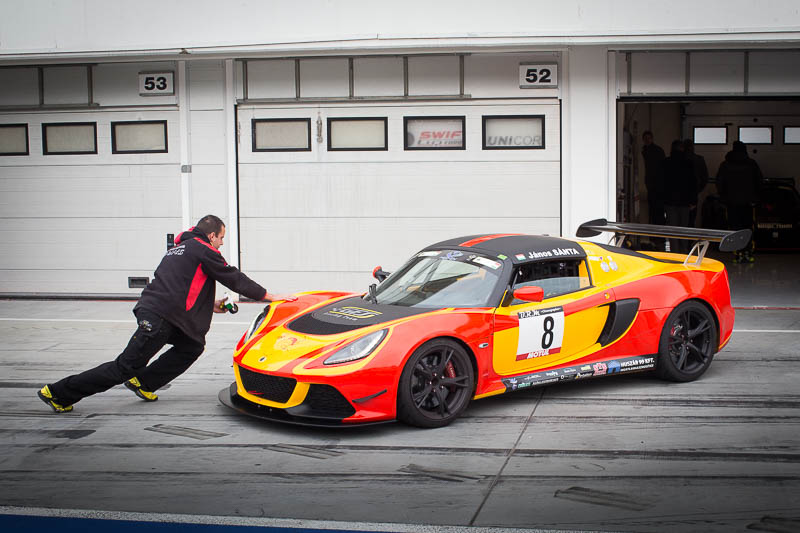 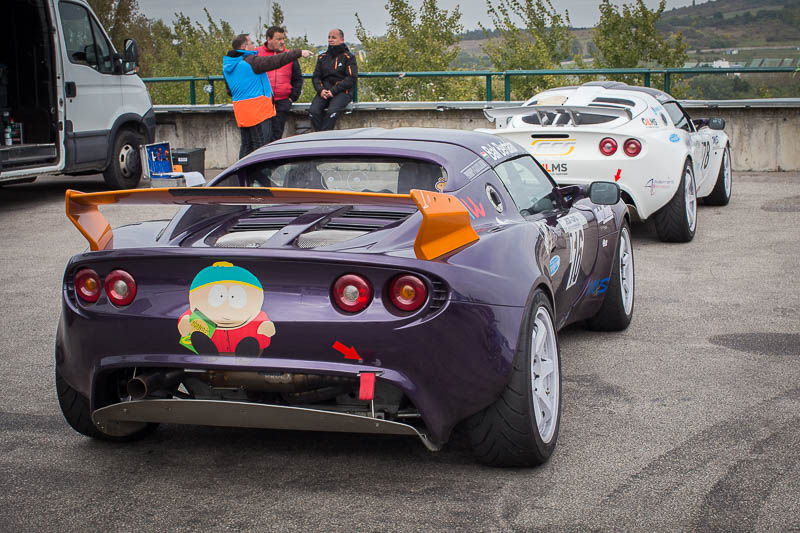 I think for pretty much everyone, Hungaroring was the tour highlight, it certainly was for me. A fantastic circuit that I'd love to return to, it had everything. I like this pic of my car on the final corner, apart from the tyre marks show that I've clearly missed the apex

but then I realised I haven't, because it is Wes driving

Really great to see Wes and let him have a go in the cars, I think he had a lot of fun. 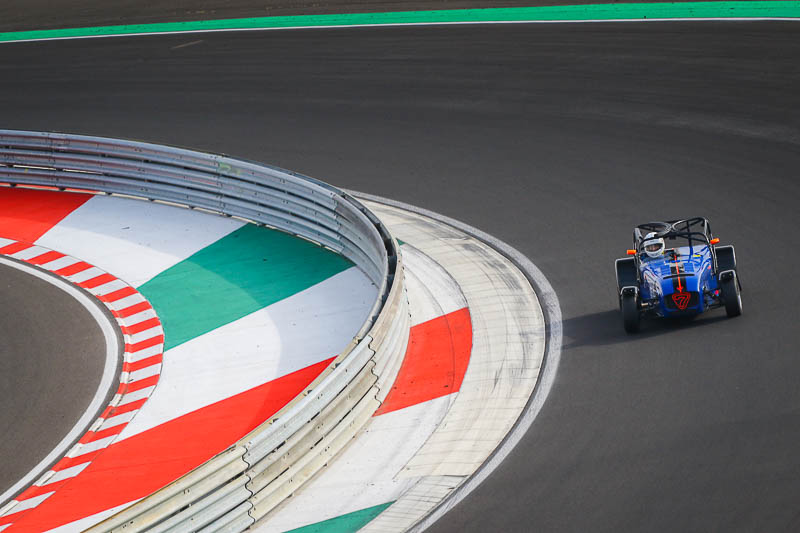 Final pic of me at the chicane. Shortly after this the heavens opened and we enjoyed the final hour of the circuit in the wet. I absolutely love driving these cars in the wet and every corner could be taken very sideways. The chicane was great, tip it in second, get the back out into the right-hand-section and then manage the transition to get it to swing out the other way for the left-hand-section. Love it 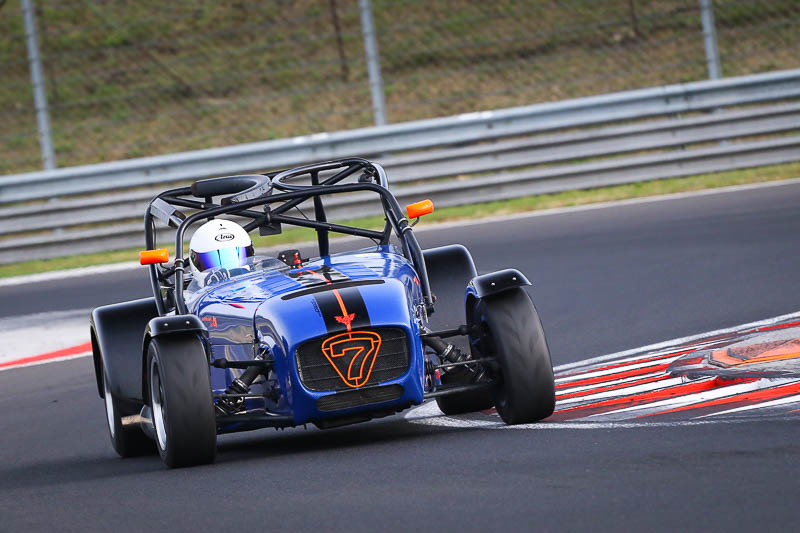 Back at the hotel we all enjoyed a night in our posh hotel at the reception that BaT laid on.

What a week with great company, great circuits and great cars. It all ran like clockwork so credit to Jonny Leroux and his team at BookaTrack they did such a professional job.


Benja wrote:Avon Turbospeed that Dave runs in the wet vs the ZZS on mine. The Turbospeed certainly finds more grip when it gets really wet.

Loved the pics of your car on circuit.