Planning a get-together, or want to tell us about a track day ?
Post Reply
65 posts

And we're off! just arriving at Heathrow after abandoning complete chaos at the homestead

Caterham on an Audi. I'm so confused!

The cars are all ex-BookaTrack Caterhams also know as Bat Cats. We selected a logo (after extensive internet trawling) of a Bat Cat apart from the guy that runs the workshop said 'Bat Cat? Looks more like a Bat Ferret to me'.

Yeah have a great time

Benja wrote:we'll try and keep this thread updated with pics etc from our travels..

I think they're probably drying out there underpants after a wet day on track and the consequences of an open cockpit!
Top

Right so a bit of an update...

After applying the livery to the Team Bat Ferret tour bus we made our way to the hotel in Brno. It was a pretty decent hotel/spa and Bookatrack put on a welcome buffet in the basement bar which also had a full-on 10-pin bowling, result

Off to Brno and it seriously never gets boring to arrive at a circuit and find your car waiting for you in the pit garage; arrive 'n drive, I'm totally sold on it! Out onto circuit for the sighting laps and wow there's lots to learn. Loads of constant radius turns and big-stops meaning repetition of 3rd all the way to 6th and then all the way back down again,...over and again. There's a really technical middle section too and some elevation changes. Me, Dave and Sean headed straight out after the sighting laps with Sean in the lead not really knowing where the fook he was going

Instructor Stu told us to expect a surprising amount of grip on the uphill right hander, maybe we misheard him as there was a surprising lack of grip and as I started to build up speed I had a massive spin there in session1.

Mid morning the rain started, that kind of drizzle that means that the circuit is greasy, there's no standing water and grip is mixed. I was pushing on and trying to pick my braking point at the end of the straight for turn1. The previous lap the 100m board seemed too early so the following lap I sailed past it with my foot still planted in 6th. Yeah that didn't end so well,..locked up, frantically pumped the brakes to try and lose some speed but it became clear that I was not gonna make the turn and the car had its first trip to the kitty litter in my ownership. No damage whatsoever and the live-recovery meant that I didn't even cause a stoppage. As I trundled back into the pitlane I had a welcome committee lined up of all the lads and BaT guys. They didn't seem to understand that my eye infection was impacting my ability to accurately judge distance

Just before lunch, drizzle turned to full-on rain so we decided to switch from ZZR to ZZS (apart from Dave who has Avon Turbowanks or summat that give far more grip in proper wet than the ZZS). 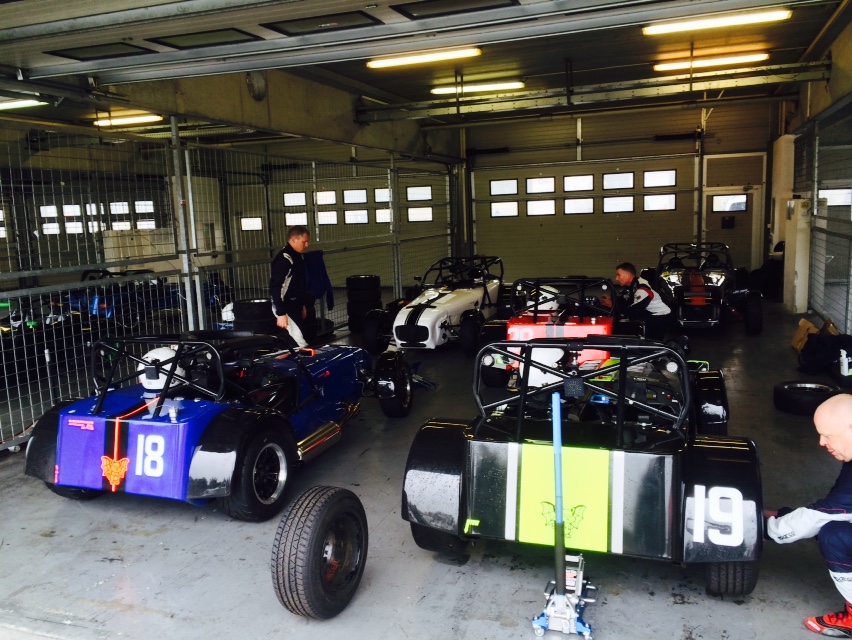 So the afternoon session was not really about going fast to be honest it was about maximum hoonery. Its a big circuit and only 30 or so cars on, many of whom didn't seem to enjoy the rain as much as us, so the circuit was empty. At times, there was nobody in my mirrors and nobody in sight in front and it felt like I had this enormous circuit all to myself. It also very wide meaning there's lot of room to try and improve your car control skills. Had some fun with the lads too of course, especially Sean who managed to do a 360 in front of me and still not let me pass

Both John and I paxed with JonnyL in the 620R and he takes it up a notch of two in the hoon stakes. I learnt a lot from the master about going in a bit slower and forget the apex, if you can see the exit, light 'em up

You can see some footage one of the guys posted following Jonny to see what I mean and you can see that it really was rather wet.

Overall I think we all really enjoyed Brno, a great circuit and certainly worth a visit

Then all aboard the tour bus to head across to Slovakia where we headed straight for the circuit as our hotel is adjacent. I think we all had low expectations of Slovakiaring; visions of a back-water run-down nowhere,..but we were all wrong. Huge, slick, clean tidy place with some testing going on of some very tasty machines. It looks MONSTER fast too with a huge long straight, I think I might need to take some knitting or a book or something in my little 175bhp Caterham. Rather strangely our hotel is next to a small zoo and outside my window is Cheetah pacing up and down. Sean's out in Bratislava the rest of us are getting our head's down because tomorrow looks pretty fierce....
Top
Post Reply
65 posts