This is where we proud owners can upload information and pictures of our pride-and-joys (their Exige that is..)
Post Reply
532 posts

My 2004 model with aircon weighed in at 932KGs with pro alloy kit, with a race battery and ultra light 240r wheels.

Dunno if thats of any significance!
Top

Yep that sounds about right. When mine was on the scales last year it was 935kg with OEM intercooler, big battery and fat wheels.

So you've gained the 14ish kg of Chargecooler, but ended up 3kg lighter through the wheels and battery... the maths add up. Nice turd on the morning of the trackday and it's pretty much an S1.
Top

When I weighed mine the last time when it was at its lowest weight it was 880kg with AC and a full tank of fuel, a lot of carbon went in to getting it to that weight when you consider the car still had AC, huge brakes, accusump, gearbox cooler etc.
The list of carbon was;
Roof
Boot lid
Diffuser
Rear Wing (large curved reverie one)
Splitter
Seats
Front access panels
Doors
Door cards
Sill covers
Side scoops
Centre console
Add in the 240r wheels, race battery, proalloy tank and removing all the interior panels and carpet, that was everything that saved weight (I left the stereo and front speakers)
Last edited by ade on Tue Jan 14, 2020 10:51 am, edited 1 time in total.
Top

Good info that, I can imagine a huge proportion of your savings as come from will be the boot lid and spoiler - it's unreasonably heavy as I found when swapping out the old twin-struts for the newer single one.

I'm not "into" carbon fibre as a rule, but the boot lid is one area I'd consider it even if it just got painted laser blue to hide the weave

Roof, boot lid and the outside of the doors were painted to match the car, all the other parts were lacquered carbon.
The big saving were all the external parts plus the seats, but you'd be surprised how much the door cards weigh, I think somewhere I posted most of the weight savings as I went along. But even each access panel was 500g lighter, making an overall saving of 1kg for 2 of them
Last edited by ade on Tue Jan 14, 2020 10:52 am, edited 1 time in total.
Top

ade wrote: ↑Tue Jan 14, 2020 10:51 am Roof, boot lid and the outside of the doors were painted to match the car, all the other parts were lacquered carbon.
The big saving were roof all the external parts plus the seats, but you'd be surprised how much the door cards weigh, I think somewhere I posted most of the weight savings as I went along. But even each access panel was 500g lighter, making an overall saving of 1kg for 2 of them

Sounds amazing! Got any photos in a thread somewhere? Your car sounds like quite the project.
Top

I fitted the roof etc in 2011 and the doors in 2012 or 13, think all the pictures were in photobucket so they might not work, I might have some I can uplaod
Top

He's about an hour away, has a mobile van with recharge kit and basic fittings / pipe benders to make up replacement lines. He's going to come take a look on tuesday, potentially taking my damaged pipe away but he sounds confident he can sort it for me.
Top

He's about an hour away, has a mobile van with recharge kit and basic fittings / pipe benders to make up replacement lines. He's going to come take a look on tuesday, potentially taking my damaged pipe away but he sounds confident he can sort it for me.

This week I've finished off the hose routing through the sills, where I left it the hoses were available to grab via the interior cubby hole but had no route into the front clam/radiator area.

Using the endoscope I mapped out a few candidate locations for drilling. I had a choice of having both hoses come out on top of each other on the far edge of the sill, or split them up and run one down the inside and one down the outside. I went for the latter option.

I did a diagram that may/hopefully help other people in future understand where the other plumbing runs in the sill. The AC ones are the ones to watch, as they immediately kink off to the outboard direction and 'hog' the centre channel of the sill: 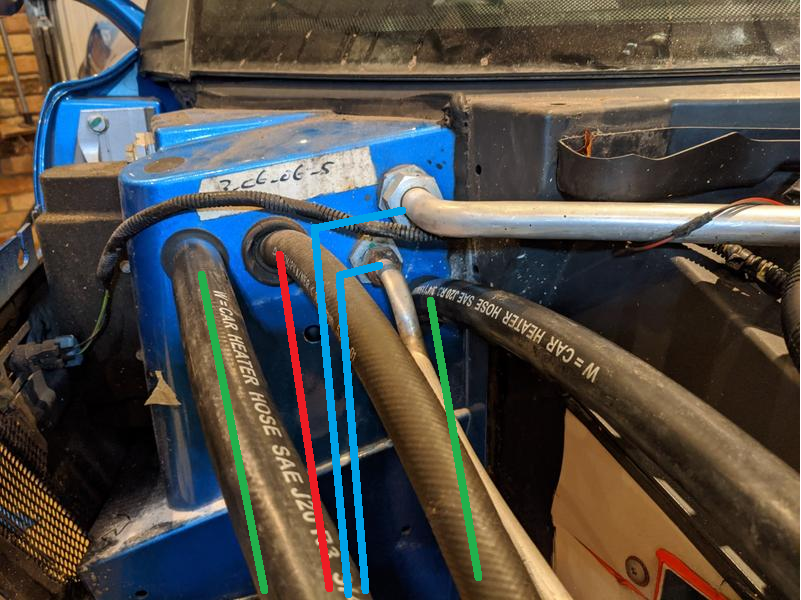 So at first glance it looks like the area beneath the two ally AC lines would be a no-go zone, but actually due to the kink it's really clear. 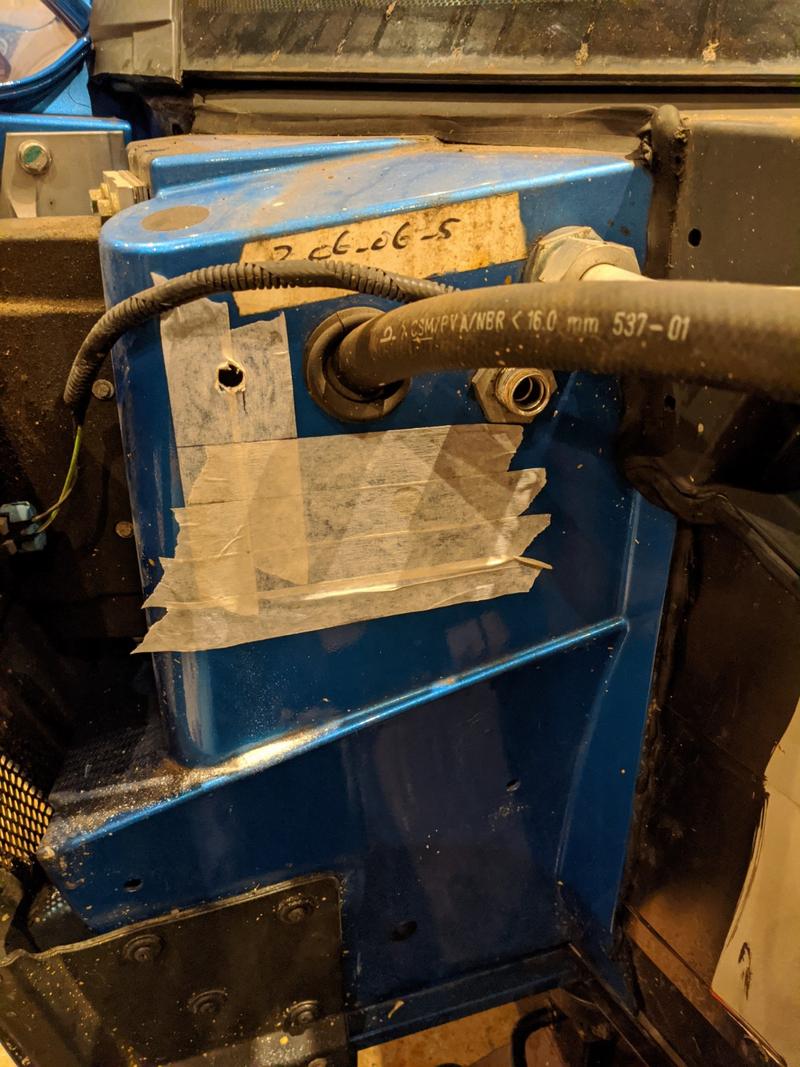 After a couple of pilot holes for the endoscope to peak through, I ran the 35mm hole saw through and then dropped some string down to drag the hoses out into freedom. They aren't too snaggy, I can add more slack if needed by pushing from the back and then pulling from the front - so allows me some room for adjustment once the clam goes back on.

Inside the sill I put some edging on a sharp-ish edge on the door hinge mechanism, pictured here: 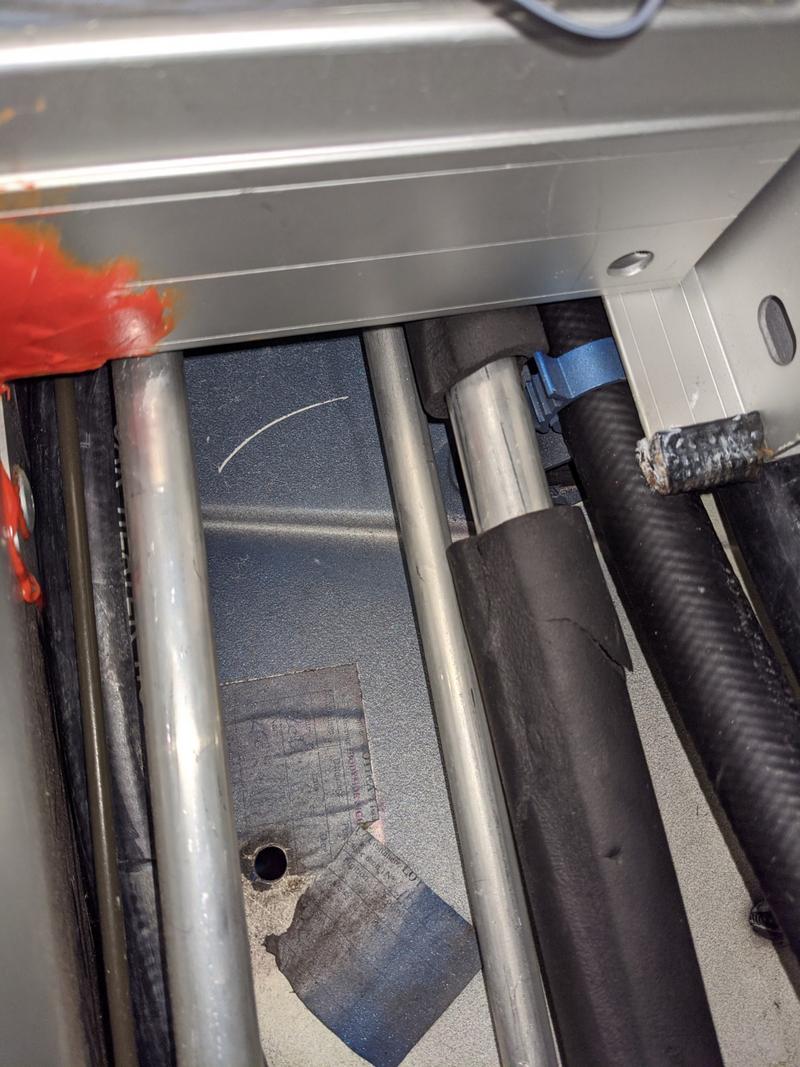 You can see my CC lines here, one on the far left snug behind a brake/clutch line and one to the far right of the oil cooler line. AC hogs the centre bit.

It was a really triumphant moment when the hoses came through, by all accounts the hard part really is done. My hand isn't just for show, it's completely fucked from doing this job. 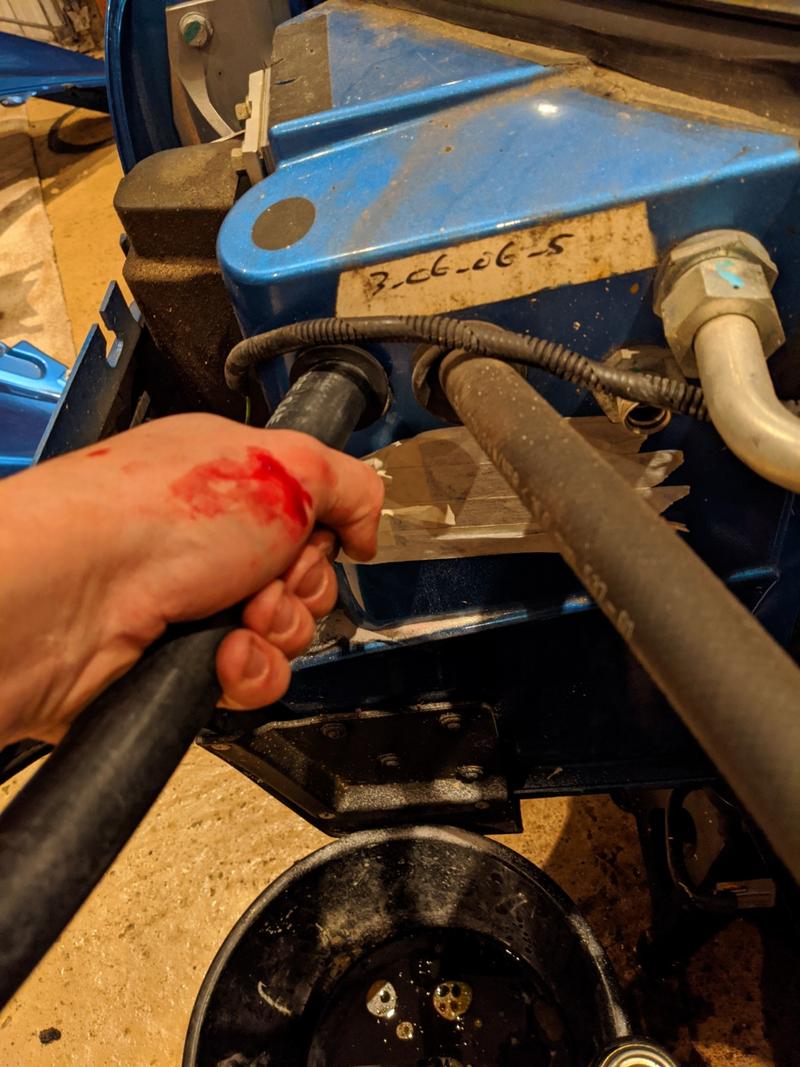 Following this I got the chargecooler pre-rad plumbed in, and re-attached my engine coolant hoses with new jubilee clamps ready for the coolant refill. 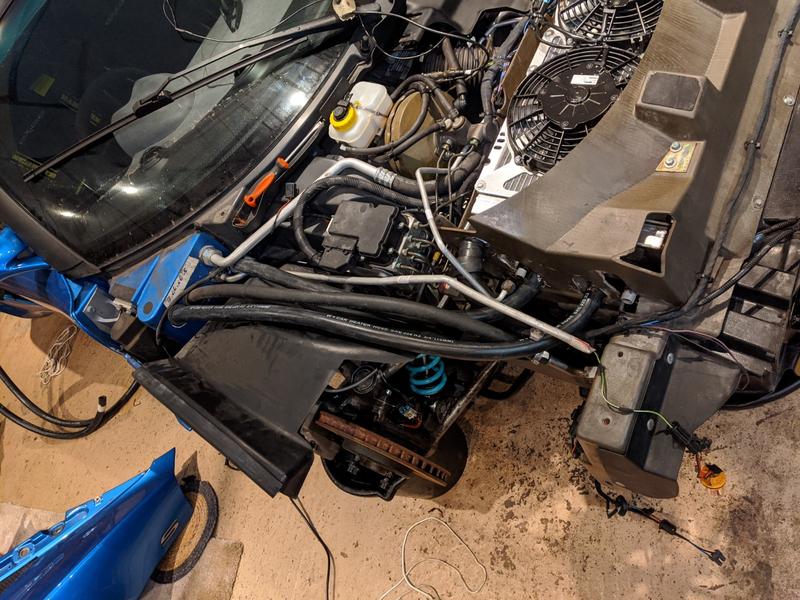 Next up was to re-attach the oil coolers, should be an easy job but I tarted them up a bit first: 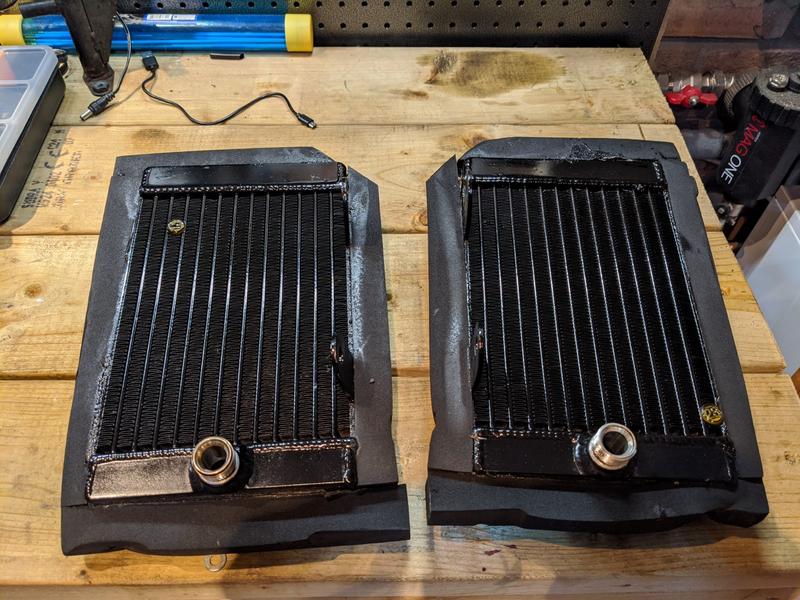 Unfortunately, I noticed that the thread on the NS one was a bit damaged. Very soft aluminium and looks like I could have damaged it during storage whilst the other work is going on. I tried to slowly/gently thread the fitting back on in the hope it would clean it up - but it just made it worse.

Luckily a fellow owner removed his oil coolers a year or so back and offered his up for a generous price so I had a backup. I collected those last night but after a chat with a local engineer decided to have a quick go at cleaning up the thread on my cooler. 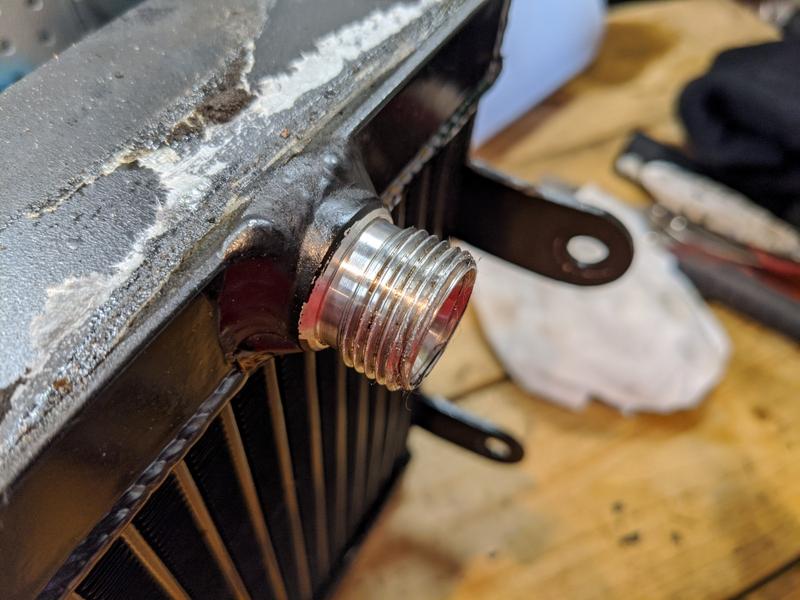 It actually cleaned up really well, so after gingerly attempting to put the fitting back on - I think I can declare it fit for service once again. The fittings seal on the inside via a taper and o-ring, the threads are just used to clam that in place. I've put a bit of threadlock on it just because it makes me feel a little better - but it seems on square and flush. 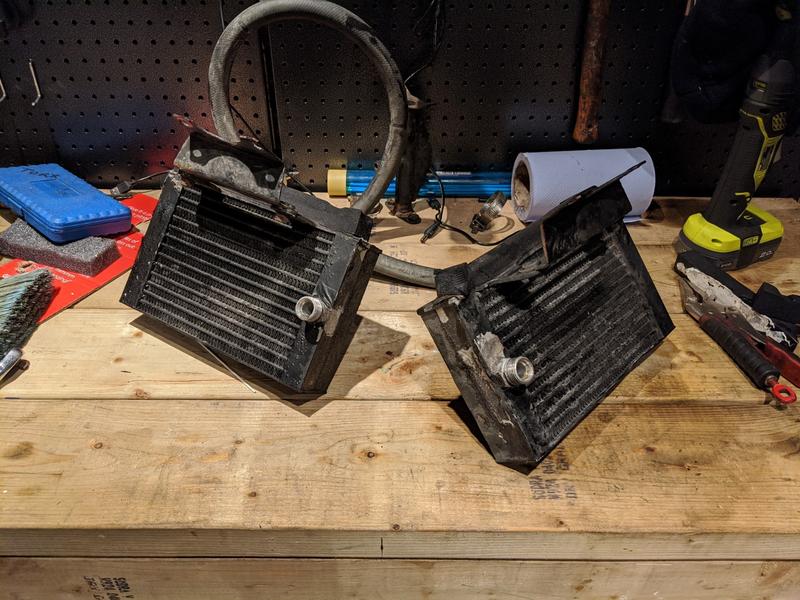 I did also consider a backup plan of simply bypassing the NS oil cooler and "downgrade" to a single cooler setup. Not just to be cheap, but because some communities feel the OEM twin cooler setup will over cool the car in most instances. They do work off a thermostatic plate but it doesn't close completely meaning there's always a steady trickle of oil through the cooling circuit. I monitor my temps and I'm fairly happy with them, but do agree that they take a bit longer than usual to heat up. Perhaps I'll come back to this plan if my fitting doesn't stand up to a few bar of oil pressure!

Other updates for the week:

- Fitted a new tow post, it came powdercoated and it's been generally coated with XCP. You can see the old one is still acceptable, but it's starting to rot from the inside - so now is as good a time as any to swap it. 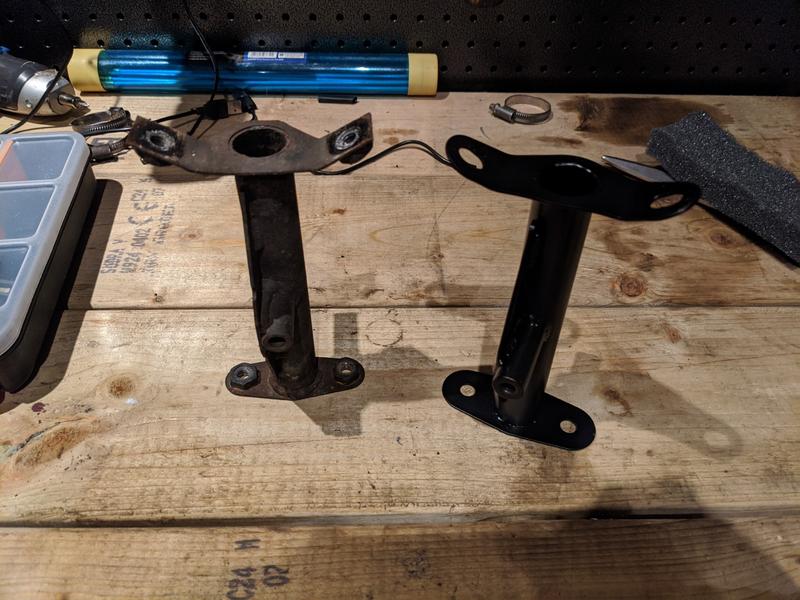 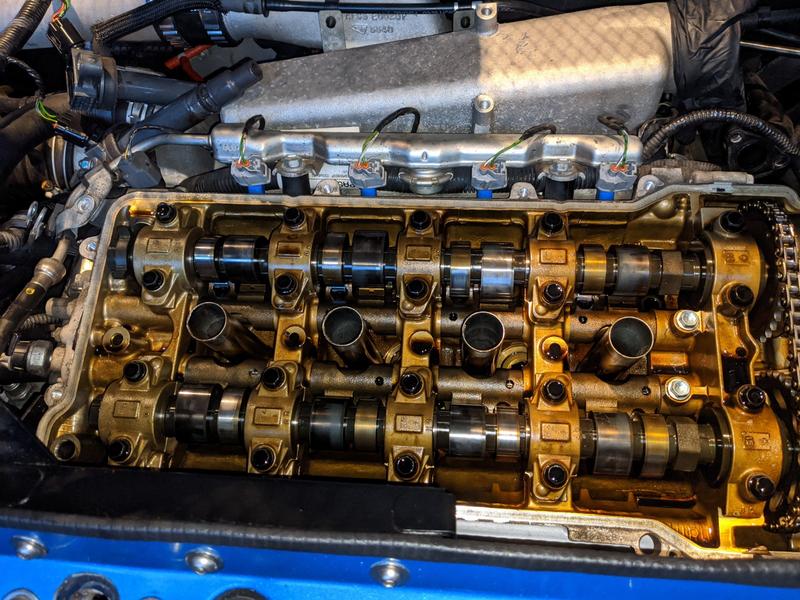 The 2ZZ has a bit of a known issue with the high lift intake lobes wearing(wiping?). The root cause seems unknown, it does seem to be more prevalent on US cars which suggests a batching issue perhaps but there are other theories including:
- Over cooled oil (see above)
- Poor usage, ragging before warm, etc
- Poor oil feed onto the Cyl3 lobe (the one that generally goes first, but not always)

Although I've got no concerns with how my car drives, I wanted to check this as I never did on my Elise - and after selling it on, the new owner had a pretty bad engine failure on track. The root cause of that is still unknown as he just swapped the engine out, but a basic inspection showed the cam lobes to be HEAVILY worn, so may have contributed especially if the rockers got damage too as a result.

As for my Exige, it seems like the cam is OK for now. No signs of wear and all looking fairly tidy. 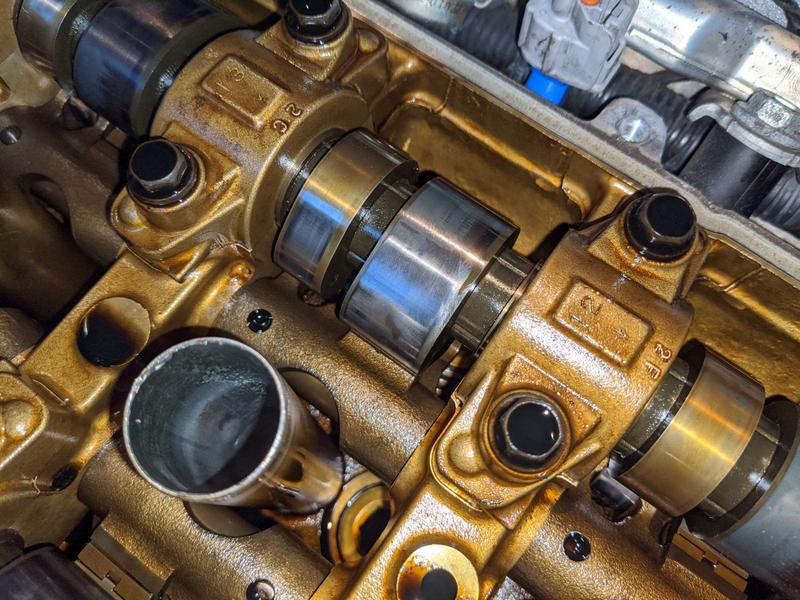 Whilst in there, I replaced another known 2ZZ issue - the lift bolts. Admittedly the lift bolt problems seemed to have been resolved by Toyota before Lotus ever got their first shipment of engines, but it's still worth checking as they cost pennies. The lift bolts in their original design were more stubby and through standard use could eventually snap off, making you lose the 'lift' element of VVTLI but also making recovery a PITA. The revised versions are pointy and spread the load better, apparently. 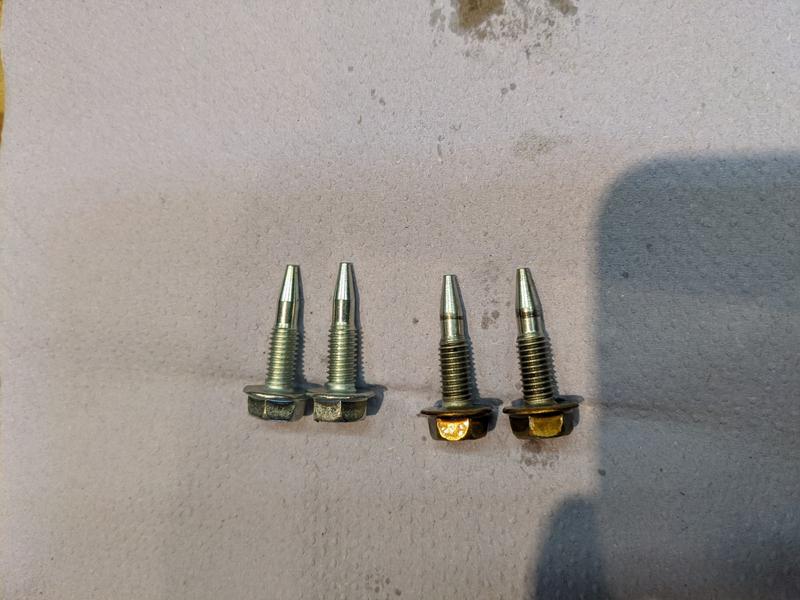 You can see the slight wear marks on the old ones removed - this is normal, but is what ultimately could lead to the old design completely failing. As you can see my (2006) engine already had the new design, so this was probably fine to leave alone, but like I say - pennies.

With the cam cover buttoned back up, I'm now ready to attach the chargecooler unit and fill both engine and CC system with coolant. I'm awaiting some engine oil so I can do a quick oil change before I kick off, as I lost a fair amount to removal/refitting of the oil coolers.

Oh, on that note - I wasn't sure what would happen if I started the car with the oil cooler circuit effectively empty. I've "primed" the system the best I can by pouring oil into the top of one of the coolers - and I'll give the engine a good few cranks without the coils connected to hopefully redistribute pressure again. 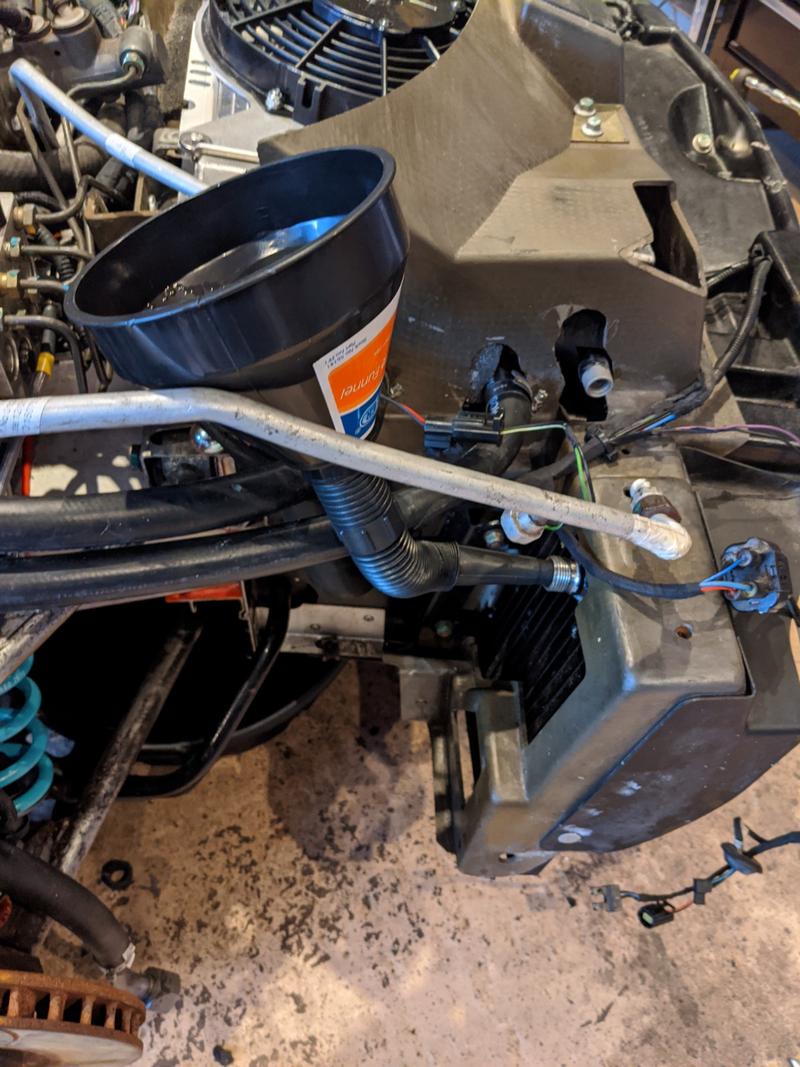 Small AC update, I've got a mobile regas engineer coming on tuesday to check out my mess. He's got kit for making pipes at the road side, so he'll either sort me out on the day or he'll take my pipe away to get a proper replacement made. We're also toying with the idea of swapping it for a rubber one too to make routing a bit easier. If he can sort a replacement out on the day, we'd really like to thoroughly test the AC system, so getting the car running properly before tuesday is my next goal.
Top
Post Reply
532 posts